I've been pondering the fact that most e-mtb manufacturers only warranty the motors and batteries for 2 years (Specialized and Pivot that I know of).

If a motor or battery should fail after the warranty has expired it would seem that the cost of replacing the motor many not even be worth it.

Considering mountain bikes pretty much lose at least half of their value after 2-3 years and the fact that a motor or battery is, what, at least a $1K, one would have to think hard about whether it would make sense to replace.

Surprised an extended warranty isn't offered. Or perhaps some sort of insurance. I think many people keep their bike at least 3 or 4 years.

The market may very well evolve into that scenario, very early in the game right now. The market is going to have to be adaptable no matter how you cut it.
W

According to BRAIN (too lazy to go find a link but it was in an article I read 4-5 years ago) the average "high end" bike (I think their definition was >$1200 or something like that) is kept by it's original owner for an average of 18 months. Unfortunately that wasn't broken down into road/city/mountain or anything, it was just based on MSRP.

Yes, 18 months. I don't know anything about how that is distributed (maybe they surveyed 100 people and 90 of them get a new bike every year, while 10 of them keep their bikes for 6 years each, or maybe it's 99 people/1 year and one crazy dude who keeps his for 51 years) but it's a big reason manufacturers don't want/need to offer longer term warranties.

I also don't know/remember if rental and demo fleets were included. Those get turned over every year which would bring the average down some.

I would imagine e-bikes will be generally a similar story. Lots of folks upgrading/replacing (especially as batteries continue to improve) pretty often and a few people hanging on for the long term.

There's no doubt that there's a lot of room for advancement in the motors and batteries of e bikes. I expect that as technology improves, it will be harder and harder to distinguish an e bike from a normal bike, and most people won't want an old bulky looking e bike that looks like an e bike.

I bought my wife a specialized turbo levo comp. I don't expect to get much out of it when it's time to sell it, but even knowing that it's been one of the best purchases I've made.

Just some of our scenarios:

-We've done our weekly group ride / no drop warmup and now it's time for the "fast" group of guys to go for a ride. She can switch to the ebike and join us

-I'm going on a 50+ mile ride. She can join me on her normal bike for 25 miles then swap to the ebike for the remainder

-I want to get some training in with a faster rider, but none of my friends are riding that day. I can let her lead and chase her on the climbs

-A first time biker wants to give mountain biking a try, but doesn't want to hold up the group. They'll still be slow, but on the e bike the group can still ride at a fun pace, and the new rider will have more fun knowing they aren't holding everyone up.
W

This is why I have only added motors to bikes to date. That way you can remove the motor and still have a bicycle, plus you have control over the battery cost, size, makeup, type, etc... The battery and motor can then go on another bike. Currently I have 3 eMTB's and 2 battery packs. They get switched and swapped all around. ;-)
B

The way some are priced it takes a disposable income to buy one, especially when something better comes out the next year. Hey, everybody's got teeth right?

What I fear is the planned obsolescence that the bike industry seems to subscribe to. As the technology advances they get to sell more new stuff. The last years models are discounted and still end up somewhere but it is too early to tell how well they will handle replacement motors, parts and service when each new year brings mo betah.

Whiptastic is with the program. Open source component builds allow you to ride the bike that best fits your needs that also best fits you. Already have a bike you are familiar with? Slap a torque sensing mid drive kit, not the BBS which is cadence, and a battery on it. It will give you enough of the e thrill believe me.

Battery wise the Bosch et. al. systems are 36v. Rocky Mtn. has broken the 48v barrier with their offering and Continental also uses it. While 48v does represent a higher voltage what is most significant is the fact that there is a gain in available watt hours (ah x v) which as a 48v can be every bit as frugal as a 36v means more time in the saddle. There is a gain in power which is good to have on tap but mostly you are in the 250 to 350w range riding single track.

Future proofed also as you can upgrade batteries here soon when the new 20700 cells come into play promising more charge cycles and a higher c rate at about the same weight. So it will be plug and play for the OS crowd and total upgrade time for the manufactured set. 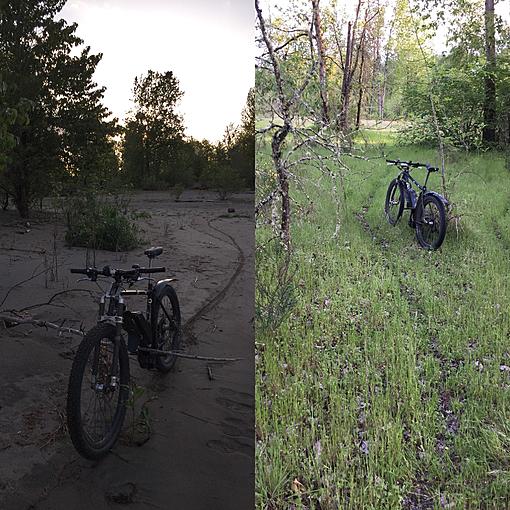 They don't seem disposable to me since I have almost three years on my BBS02-MTB system, and the battery does double duty powering a rear hub drive bike that is used for errands. Also torque-based PAS is fine (I've ridden 25+ bikes with it), but it's a matter of taste, and I prefer RPM-based.
E

Most consumer electronic devices have a 1 year warranty.

Industrial equipment, like CNC machines, have a 1-2 year warranty. This includes the multimillion dollar ones.

The only products that seem to have longer warranties are automobiles, and bumper-to-bumper typically cuts off at 3 years.
T

Started mtb in 1987, I have bought 10 mtb in my life. Thats about 3 years a bike. I still own 8 of the 10. Five are currently rideable, the others are retro rebirth projects.
Just a fact of one turd's possessions.

Figure my e-bike might be the first to become unmaintainable/ not worth it.
B

DIY ebikes are not disposable, you'll always be able to keep them running if you so choose. OEM ebikes have a limited shelf life, I think propietary replacement batteries will be the biggest hurdle, and motor mounts will change, since "standards" in the bike industry are temporary, so if your motor croaks in 5 years I think you'll be SOL. It'll be interesting to see what happens with the used ebike market as time goes on.
B

Harry, I agree. My Haibike Yamaha mid-drive (which I don't ride much since it's not as much fun as my BBS02) probably will be relegated to the scrap heap if the battery or motor expires unless some way of repairing them reasonably somehow become available.
C

Agree. Can't find the link right now but I think a Specialized replacement/extra battery is $1300. That is just nuts.
N

I'm interested in a levo or the shuttle, shuttle might be better in this context cuz it uses a standard shimano battery
C

When these things become more and more popular, there will 3rd parties offering battery recelling services etc. I would not be concerned about the battery anyway, they should last about 20.000 miles (700 charges x 30 miles per charge). I would be more worried about the parts in the motor and their availability in 5+ years.

I
beecool bikes responses on repairs their bikes