All class 1 ebikes are limited to 15mph in Europe and 20mph in USA. This is a ridiculously low speed for a road bike. I average 20+ on flat ground and above 20 is where you would want the assistance the most.
Doesn't even seem worth dragging around a motor and battery if it stops helping you at normal cruising speed.
B

CA law allows 28 mph (for bike lanes contiguous with a road), but still too slow for some (probably).
A

That's a class 3 ebike. 28 is sufficient with current battery capacity.
B

it's not about thrill, speed, and excitement. it's about basic transportation, not endangering pedestrians, and one less car.
W

If you want to haul ass on the road, just get a motorcycle?

20mph is pretty fast, in the grand scheme of things, when running in the bike lane/on a bike path.

alex, sorry, you're right that's Class 3; 20 is somewhat slow for the road, although my Class 1 gets up to 22-23 on the flat with me helping which is okay for errands.
B

HomeForumClassic Mountain Bike ForumsE-Bikes Drop bar road class 1 ebikes are a joke.Reply to Thread
Reply to Thread
Post a reply to the thread: Drop bar road class 1 ebikes are a joke.
Preview
Yes, a Class 1/EU spec "road" bike is going to not be very sporty. As mentioned 20 mph is plenty fast for bike lanes and MUT's and it is my experience way too fast when at all crowded. Common sense applies.

But......when the open road/elevation gains beckon that is where the more power rule comes in to effect. I have a few thousand miles plus now on drop bar e bikes and they are way too much fun. Uphill and down, headwinds, pavé, gravé, simple single track are all good.

I don't agree that the adage of "if you want to haul ass on the road get a motorcycle" is valid. I had a nice KTM that was ok to ride back and forth to work but just going out for a "ride" was kind of boring. Now that I have combined the two into a "bicyclized motorcycle" I am much happier going for a ride as I get my exercise and speed fix at the same time. Plus I am going at a mellower speed where I can enjoy my surroundings more, quietly and seeing some places and things like the two owls I saw yesterday I otherwise might not see 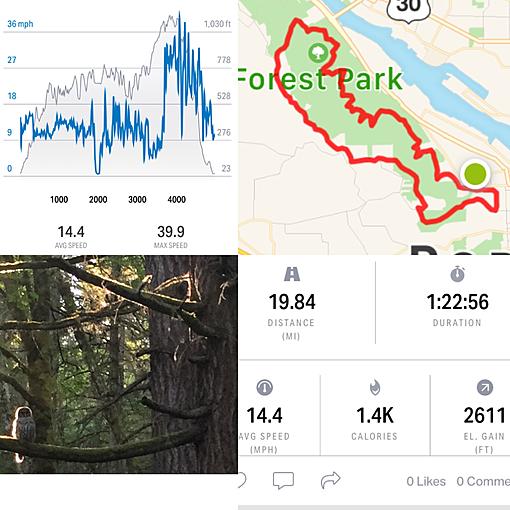 As long distance touring machines or century rockets they have a ways to go as carrying the extra weight of the system and it's inherent complexities is problematic. But for under 50 mile rides at speeds above what you normally would be able to achieve that you can rip off in a few hours of spirited exercising they are the right tool for the job.

A fit rider on a light bike is going to be about as fast as a semi fit rider on a heavy bike as at this stage a 40 lb. bike with decent power/range would be considered light. But there is nothing wrong with that and shouldn't be looked at as such from either viewpoint.

The best thing about focusing on road riding is that it doesn't require shuttling and is doable right out the front door. I might add that I also don't think e MTB's are all that good of an idea and still ride a mtb. Roadies I have found in general to be kind of standoffish but there is way less camaraderie amongst them so you don't have to interact with them. Fine with me but I do offer a pull as I go by or at least ring my bell.
A bike by any other name is still a bike.
Last edited by a moderator: Aug 1, 2020
A

My main point with this is that drop bar ebikes are different from flat bar ebikes. 20 mph is fine for a hybrid bike that I'm going to ride around town and load up with grocery's. It's also perfect for my wife and I to ride together. We ride to dinner every week and it's the perfect boost for her to keep up and I get a workout.
I have a 15 mile commute on flat to rolling hills depending on my route. When I ride on flat ground I average 22-24mph with a good effort. Getting an ebike is pointless as it would actually slow me down with the extra weight.

I don't need to go mach speed, but hitting the wall at 20mph feels awkward. You tend to hover around the assist on/off point as it breaks your rhythm. A class 3 fixes this but restricts you from bike paths that link me to work.

Having a arbitrary limiter on the speed just seems silly as road bikes operate in a different speed range than hybrid or mountain bikes.
B

FOR ME (maybe not for you) I would ride with the 28 mph system and keep it cool on the bike paths.
L

Couldn't you just ride slower on the bike path with a class 3? Not that you should break the law or anything.
B

I don't see a huge market for them for a couple of reasons even at class 3. If you are new rider, or unfit rider, or old creaky rider, you likely won't want a drop bar bike even if you can fit 35mm tires in it. Usually only someone with a background riding drops would choose to do so, most people feel far more comfortable on a flat bar bike.

And, they seem like overkill for a bike path. I ride to work most days on side streets and bike paths and can go plenty fast just cruising, be it on my mtn, commuter or road bike.

Unless you live where there's monster climbs, as has been stated, if you already ride, and are somewhat fit, the benefits are debatable vs the extra weight. Live in the mtns, have blown knees and are surrounded by hour long climbs? Sure. If you're an experienced rider and out of shape, I could see it would be nice, but compared to a commuter, they seem like a an expensive single purpose tool.
A

Bike paths have 15mph limit and yes you could, but you are still breaking the law.
Most ebikes come from Europe or are designed under their regulations as they are the biggest market right now. They are limited to 15mph on a road bike. an out of shape ride can exceed that.
A

Exactly. People that pick a road bike are usually more that casual riders. I commute on my Roubiax with 28mm tires and have thought about getting an ebike to help complete eliminate using the car, but they don't make any sense with my current commute. I feel they don't make sense for most fit riders, unless you are climbing a mountain or have a very specific hilly route. I'm faster on a regular bike.
B

I'm finding they don't make much sense for an aging, modestly fit rider except as something that adds an extra dimension (MTB); they're great for errands for me though especially on my "faster" e-bikes.
B

I resemble that and couldn't agree less.