OK so yesterday I took out my 26" hardtail with the new 500W Bafang front hub motor and 13.5 Ah battery to some real riding, not just on the street. Weight of bike including rear rack, duffel bag with 3 pints of water and some other stuff is 59 lbs (plus myself). Not a bad total weight for $750 for the hub & motor and then around $400 for accessories and LBS labor.

Only the 2nd time I've ever been on an e-bike and first time on dirt. Was it fun. Yes. Was it the greatest fun I've ever had. No. The sensation is a lot like having taller gears on a very lightweight bike and just pedaling normally on a flat or slightly inclined surface, and going 50-75% faster. I would imagine like having a 15 lb road bike with tall gearing that just goes with little effort. Does well on pavement, fire roads, and dirt trails. I did have to push the bike up a couple of steep inclines and it wasn't too bad pushing it up actually. Downhill is actually nice and stable, it handles sand and loose stuff better than a lighter bike. Feels like a small lightweight motorcycle. On a real trail however, I would not really call it 'mountain biking'...you have to constantly switch between zero assist down inclines and flat surfaces (or coast the bike), and then do level 1 up inclines since the bike is almost 60 lbs. You have to worry about that AND shift chainrings/gears too. A lot to think about on an up and down trail. Maybe I'll get the hang of it later but it's a lot of mental work just to keep the bike upright with the proper front gearing, back gearing, and assist level on/off.

I mostly stayed in pedal assist 1 and 2 (5 levels). 1 goes up to 130 watts. You can feel the difference for sure, and it can help you out of a relatively steep incline when the back tire is starting to slip; the front tire's torque can power through the tough area and get you up to the top of the incline. This is a lot like having a car with 5 gears. You have to match the assist level number with the speed you are going. Level 2 goes up to 230 watts. That's the normal level I used. That's about 50-75% faster than pedaling only. But I'm kinda confused on level 3 (I rarely used 4 and have not used 5 yet).

Level 3 goes up to 400 watts, even more watts than the jump from 1 to 2, but the bike doesn't seem to go 74% faster even though the watts are 74% more than level 2. It feels only 30% faster. Seems like level 3 and up is a law of diminishing returns at least for this cheap setup. Maybe I need to use the throttle more or something. BTW the throttle is like an old 70's car with a single turbo: lag and then a surge of torque; it cannot be used at low speeds uphill, even on pavement, the front wheel will spin. I don't mind level 2 for most of it, it's nice to enjoy the ride at that speed of around 8-10 mph uphill, but I was hoping to haul ass up the mountain on pavement or hardpack. I thought 500 watts was plenty but maybe not. I'll have to try it close to my car/home with level 4/5 or throttle and see how many miles I can get before the battery is drained. So far 16 miles and about 60% depleted, fairly normal for a 13.5 Ah from what I've read.

So is this increasing inefficiency for level 3 and above because it's a hub-drive and not a mid-drive? Or just because it's a cheap setup? Are mid-drives smooth and linear up hills/mountains regardless of assist/watt level? In other words does 300 watts of mid-drive assist feel exactly twice as fast and powerful as 150 watts? Or is it because you can match the watts to your chain-driven gearing and it's better because it's connected to the drivetrain itself?

Bottom line is that e-biking is fun on dirt, it's pretty cool, it's a different experience, but uphill I'm worried about draining the battery on a 1000 ft climb when 400 watts at level 3 doesn't even get me up the hill at more than 8-12 mph. It will not drain the battery at level 2, but then it takes a while to get up the hill and that kind of defeats the purpose of what I'm trying to do.
Last edited by a moderator: Aug 14, 2020
B

I can change how much assist levels eco,trail, and boost give. Stock they feel almost double each time. I have a mid drive focus and only ride it off road. My brother has a Surface 604 fat bike with bafang rear hub motor and only rides it on level 1, if that. He’s a much stronger rider than myself. We hammer around, it’s fun. Never ridden a front hub motor.
B

Not much good on a mtb but the bomb for any road type bikes IMNSHO. 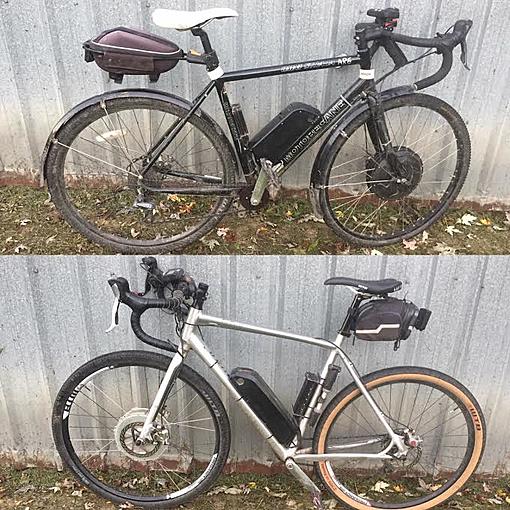 Nice. You got it figured out.

Aug 12, 2022
Benoksanen
B
H
Thoughts on my 8 different ebike motors