It amazes me that the Intese Tazer doesn't get more consideration from people interested in E bikes. It literally checks every box including amazing price comparable to the The Decoy which everyone seems to be in love with with a far more reliable warranty process.

I think the thing that probably holds this bike back the most is the funny looking downtube and if there was no point to it I'd understand but the reason it's shaped like that is for clearance with the fork crown. With the Decoy they have to put a limiter similar to Trek's knock block to keep the fork from hitting which leaves you stuck with that headset.

A little about me before I talk about my experiences. I'm 6'5 240 and I live and ride in SoCal, Laguna Beach mainly, so what interests me most in a good E bike is downhill capabilities. I have owned a dialed in custom Pivot Shuttle 29 and a couple Tazers now and spent time on the Levo and a few Haibikes.

The Pivot Shuttle 29 was the first E bike I owned and at first I loved it. I loved being on an E bike so much that I wanted a second one to have for my friends to be able to ride with me. So I decided to my a Large Intense Tazer Pro build that my shop had in stock out of convenience. To be honest I never even considered riding it until I busted a spoke on the Shuttle and wanted to get a ride in one day and that's when everything changed. Even though the bike was too small and the abrs were too narrow for my taste I realized how big of a difference there was in downhill capability betweeen the two. During this time Intense didn't have an XL Tazer yet so I wasn't prepared to ride a Large full time.

Fast forward a few months to January 2020 when I was finally able to get my hands on an XL and of course being me and loving custom built bikes I immediately stripped it down and completely custom built it back up with carbon wheels, a coil rear shock, and a dual crown fork lowered to 180. The bike set up this way was really rad and definitely a head turner but to be honest it didn't feel as good as the bone stock Large pro build I owned before. I think a big part of this was I couldn't get a heavy enough coil srping for my weight and a fairly short stroke shock, I had a 650 and probably needed a 725.

Fast forward again to May 2020 with the release of the Fox 38 and I rebuilt the bike again and this time it was truly something special. Put the stock Float X2 that came with the bike back on along with a new Fox 38 and some new custom build carbon wheels and this time teh bike was an absolute rocket ship right out of the box. I had purchased the fork at 160 because that was all that was left with the intention of upping it to 170 but I later realized that the bike feels too balanced with the fork at 160 and decided I didn't want to mess with the geometry at all.

To be honest most of the upgrades are fairly unnecessary and if I didn't work at a shop probably wouldn't have done any. I always go back to the first time I rode the out of the box Tazer Pro while I owned a top of the line Shuttle 29 and just how much it impressed me on the descents. The Tazer wasn't better in every way though, on the flats the Shuttle felt faster and more like a "trail" bike. But the second the trail got steep, fast, and technical for me it didn't compare.

The point I wanted to make here is not that the Tazer is the best E bike out there, it's just that it should get more consideration from people interested in a new E bike and you should really try and demo one if you can. 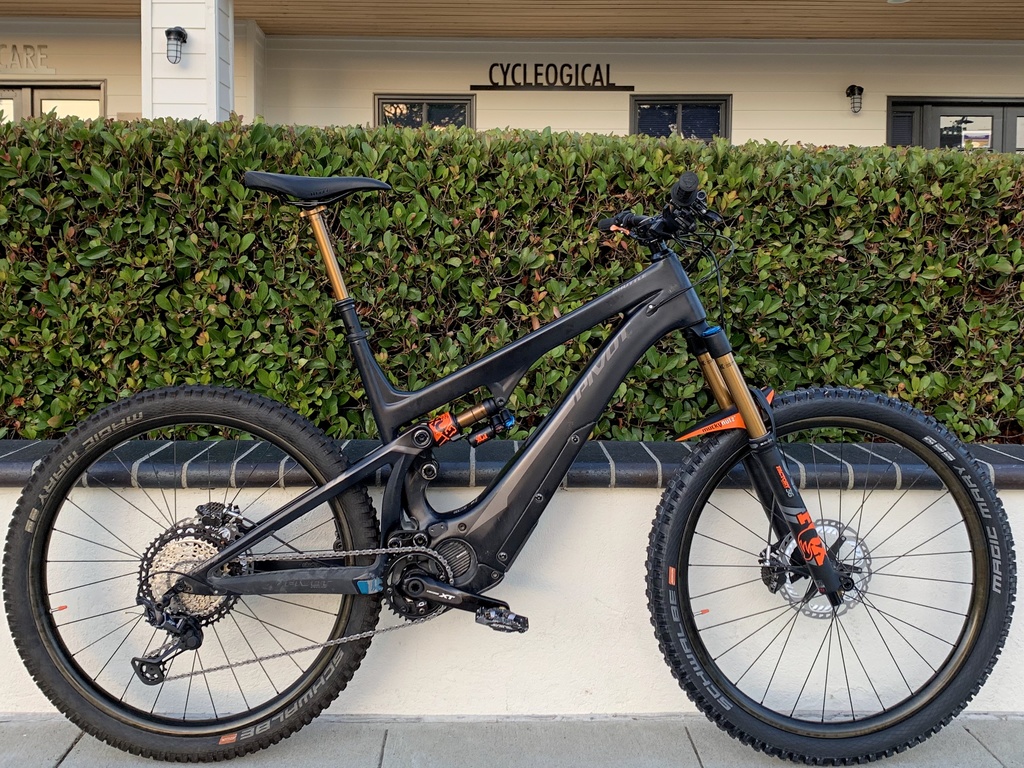 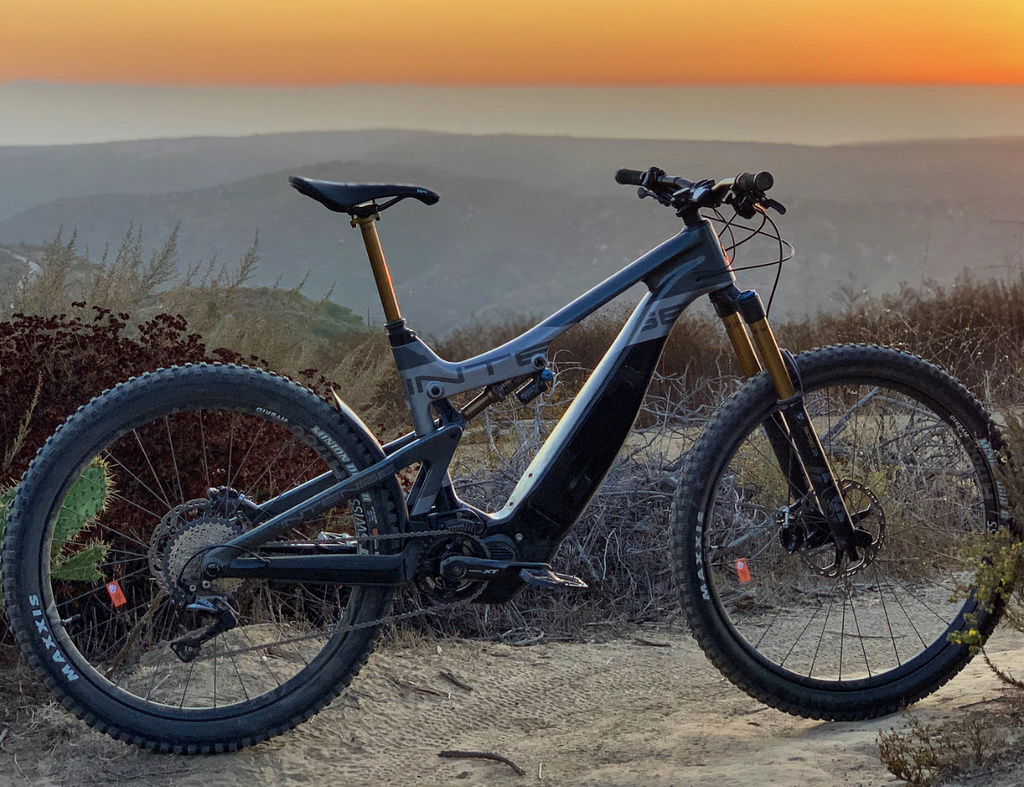 I had one on my list to begin with.

It got scratched off the list pretty quickly though, due to no local dealers within an hour drive. I wasn't pumped on the SLX drivetrain and M520 brakes on the expert build either.

I'm sure it's an awesome bike though. I regularly listen to an MX podcast and the host, Steve Matthes, has one. He's always talking about how awesome the bike is. In fact, listening to his enthusiasm about ebikes is probably what motivated me to try one out when I ruptured a disc in my back and going on long rides on a regular bike got pretty painful.
M

If your going to be dropping that kind of coin, local dealership is a great pro. Thats why those ebikes are desirable and popular. Imagine buying an ebike from Luna Cycle, and something happens and you have no troubleshooting ability, you'd be SOL. Taking a Levo to the local stealership is priceless, and thats what your paying for in the tag price.

There's no doubting that that ebike looks good, and is sleek. Most people wouldnt have a clue its an ebike while on the multi-use pathway system.... until you go up that steep hill fast.
M

Don’t taz me bro...ha, ha...mathes gets the bike for free so of he’s going to pump up the brand. He’s lost a lot of weight riding too!...The tread indicates Tazor recognition but your Shuttle Pictures looks a tad better!!...I went on a Pivot Shuttle demo ride (my first ride ever on an E-bike ) and was hooked, especially with the easy 0% financing. I too wonder why the shuttle doesn’t get a lot of talk, maybe because it never breaks and comes set up nicely! Nice you can provide a spare bike for friends as E bikes are so awesome machines!!!
R

FWIW, I have a couple thousand miles on my Shuttle. Similar to the OP, I tweaked the suspension and put a Grip 2 damper in the front and an X2 in the rear, and upgraded the wheelset. Since making those suspension changes, I'm super happy with the way it descends. I had a Trust Shout on it for a while, and though it rode well, it rode too "different" to be able to switch back and forth between the Shuttle and my Santa Cruz Hightower (also set up Fox 36/Grip 2/X2). Also, my older shuttle is set up 27.5 plus, which I prefer for what we ride on the east coast. Only other changes are that I downgraded the mode switch to E7000 (more durable/less space need) and swapped out bars/grips (not a Padloc fan).

The pricing on the Shuttle right now makes it a MASSIVE value. You'll be very happy with it.

I would also take a serious look at a Tazer if I was shopping today. It wasn't available when I bought my Shuttle.
G

No prospect of a 700Wh battery, big minus.

YT has been failing on delivering the 700Wh battery, but there's still hope. Seems like the Decoy is still the best e-MTB option out there for anyone who cares about price/value.

The slightly longer reach on the Intense compared to the Decoy is interesting though for us tall folks.
S

Cbesius, I’m curious as to where you ride your ebike down there. I was in Laguna last January, and did quite a bit of Riding at Alta Laguna with my analog bike, was disappointed that I left my ebike home until I ran across signs everywhere saying no ebikes. I did see more than several people riding them there however, and on a weekend day did see a few rangers there. No need to be specific, with all the trails I saw from the top of the world It looks like one can get to where few people go.
M

Sooslow, please PM Chris about his trails. On this site we do the best we can to talk about legal trails.
Thanks
Last edited by a moderator: Nov 28, 2020
K

What size tires are you running?
M

That Tazer with the Boxxer and coil shock is exactly what I'd want to do if/when I pull the trigger on an ebike. The biggest disaapointment on many of these ebikes is the suspension. All they seem to market is the motor, few mention the suspension. I'm disaapointed with the Tazer as it's not VPP. VPP for me is the best feeling plush ride for technical downhills. I understand for the Tazer maybe there wasnt enough real estate for the VPP + motor. But the comparable Santa Cruz Heckler has VPP. Because of that I'm leaning towards purchasing a Heckler.

That said, has anyone ridden both the Tazer and Heckler and have a comparison? Or another VPP rig for comparison. I currently have a 2019 Tracer and I LOVE its butter plush suspension, even though its an old skool pedal bike (haha), it just feels so smooth on the technical trails. And thats even without coils or tuned suspension.
N

This fall you will be able to buy the Tazer MX from motorcycle shops and the pro model will come with an Ohlins DH38 fork and TTX spring shock so sounds like it might be what you're wanting.
R

The Tazer rear suspension is pretty much the same your Tracer. Yes it is <acronym title="JavaScript">JS Tuned suspension but it is basically VPP. I have a Tazer with DVO Onyx single crown set at 170mm and a DVO Jade X rear shock. It feels like a mini-dh bike. If you like your Tracer suspension, you will love the Tazer.
M

Excellent. That's what I was wondering. I want VPP plush feeling and would hate to invest all this $$ into a bike only to have by let down by the smoothness.

What size is your frame? I want a coil but the Intense tech guys said on the smalls only a few coils will fit. Bummer!!!!
M

Oh nah!! Now that would be exactly what I want. Let's hope a local Oahu shop will carry it. That would be worth waiting for. But at what price increase?
M

Wow, just as you said! Pricing about $6000 expert and $8000 for the pro level. Only the Pro gets a dual crown fork. Available only at MX shops and Intense's website. Looks awesome except they're not making a small. The med is not my size for ETT length and reach. Dang.
M

Yes, what Bear said... it is VPP. They just renamed it when SC's patent ran out and Intense didn't need to license it anymore. Looks like a really fun bike.
N

Yeah just two sizes but I could see more sizes becoming available with how well the pre-book went for dealers. I'm actually a sales rep for Parts Unlimited so I'm pretty pumped to be able to sell these. I have a standard Tazer on the way to me now as the MX model won't be available until fall and I wanted to get back to riding sooner than that. Also for my area I don't really need the dual crown fork so I liked the standard tazer build a little more.
S

At some point these motorized bicycles are going to be too common to ignore and access to multiuse trails will be effected in some way.

All bicyclists banned would be my guess.
M

Thank you for your insightful and relevant contribution to this thread!

F
Making an Aventon Aventure “my own”

I
beecool bikes responses on repairs their bikes