Since i've been waiting on several small, but critical to finish parts and pieces to come in yet, in order to put the driveline back together and get the controls set up, i went back to finish up the electrical enclosure/48v to 12v down voltage converter Buck/circuit box.

Keep in mind, part of this function of this project is using up some of the materials left over from ~30 years of hobbies or activities that have occupied my time.. so little money was spent on this (at this time), relatively speaking... just time, and creativity.

This is the core portion of the electrics on my Tadpole.. All functions are switchable, with a master switch for master power disconnection. No battery contact sparking with disconnection/connection of the battery lead.

In the remote situation of having to do a quick inspect on the rear end or pump a tire up in the dark, or whatever, i've got a couple of rear facing white Chip LCD modules.

On the top of the electrical box, i had a Cigarette Lighter 3-1 function gadget that i converted - shows voltage output, and case temperature, as well as a USB charge port. I've got three computer fans in this, pulling air in from one side, passing it over the down-voltage buck converter, and dumping it out the other side. Switches are Master Power, and Fan/rear facing white Chip LED's.

I've got a red LED strip wrapping around the box, and an illuminated amber reflector on either side, also. Both will be switchable from the front.. Red LED strip will also be tied into a red LED whip/visibility flag, to be added yet. I still have to wire out to the front lights, and the rear running light.

Awaited parts should be in before end of May, i hope, to complete. 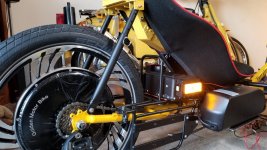 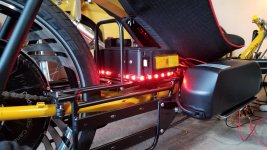 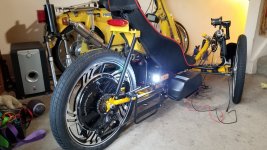 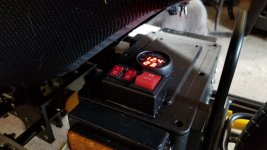 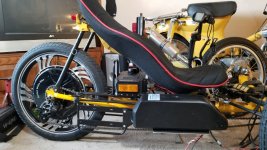 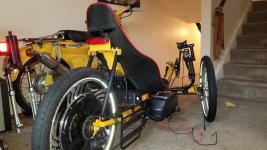 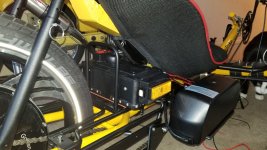 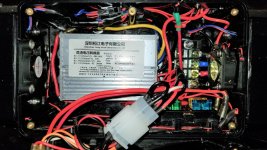 After a full weeks of wiring OCD... I've got it fully operational. I am going to call this going in Freddie Mercury Mode... because it is going to be garish and Flamboyant as Hell in appearance. Four external circuits control whip and strip lights, rear and side marker lights, front DRL lights, with the fourth circuit available for additional LED spotlights.

I will be the first to say that this is over the top in terms of overcomplicating things... I'm a sucker for a good project. I do still kind of hate wiring tho.. especially wiring harnesses.. making one for a freaking Trike, is a new one..

LED whip, additional spotlights removable (not shown in pictures/really not sure if I need them to be quite honest.. but wiring provision is there).. I can run as dark or as lit as I desire. I've actually got an motorcycle horn to wire in yet also... The wiring harness has the leads roughed in already. 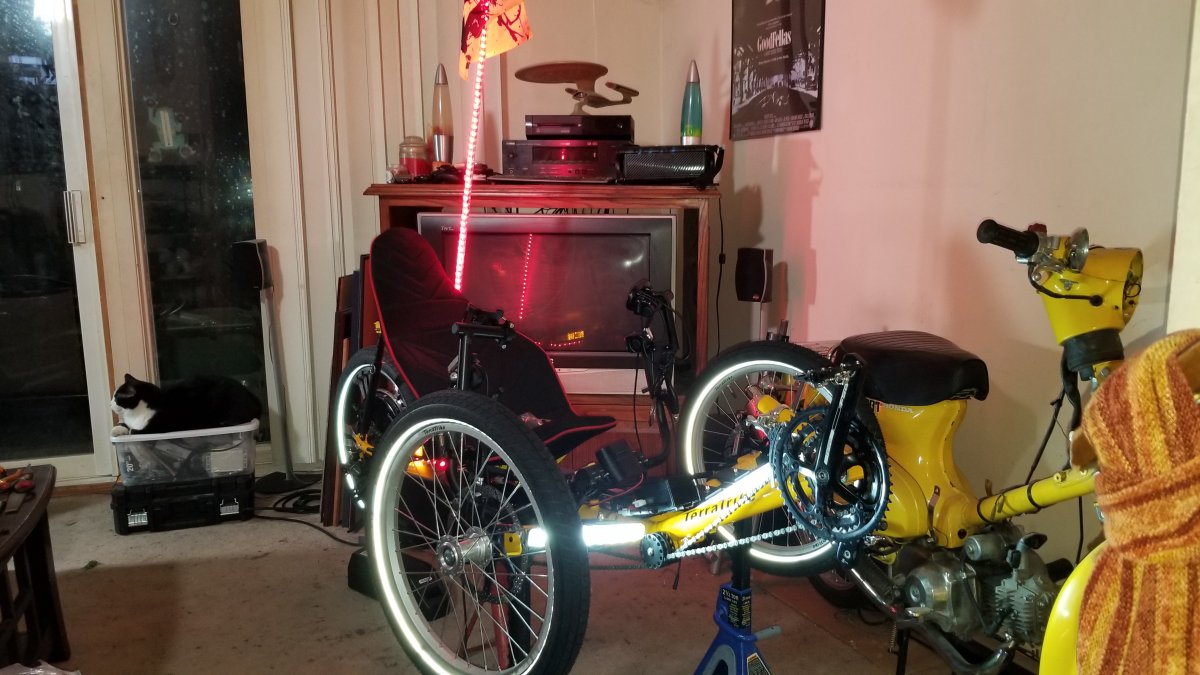 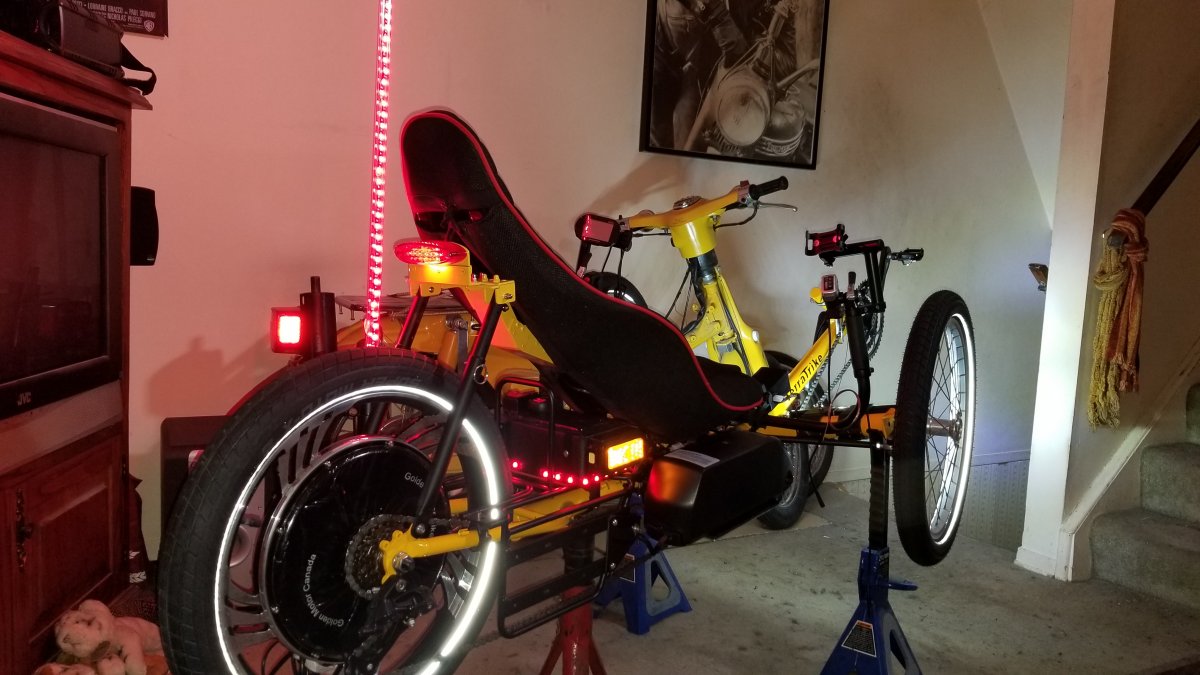 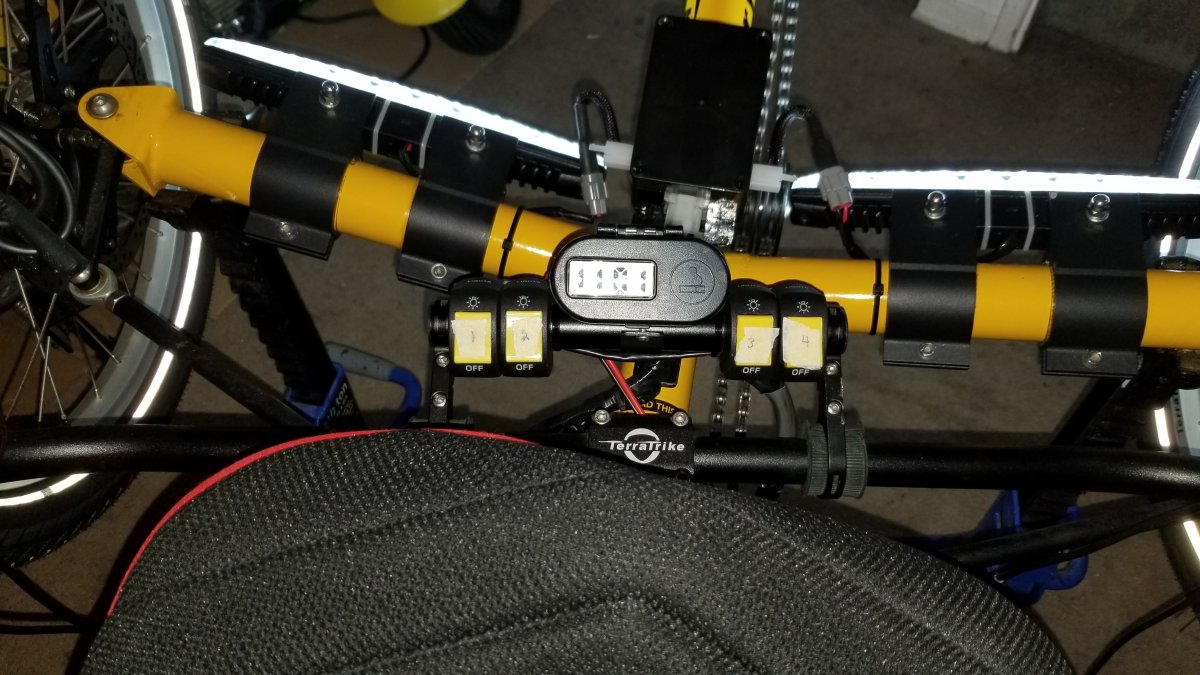 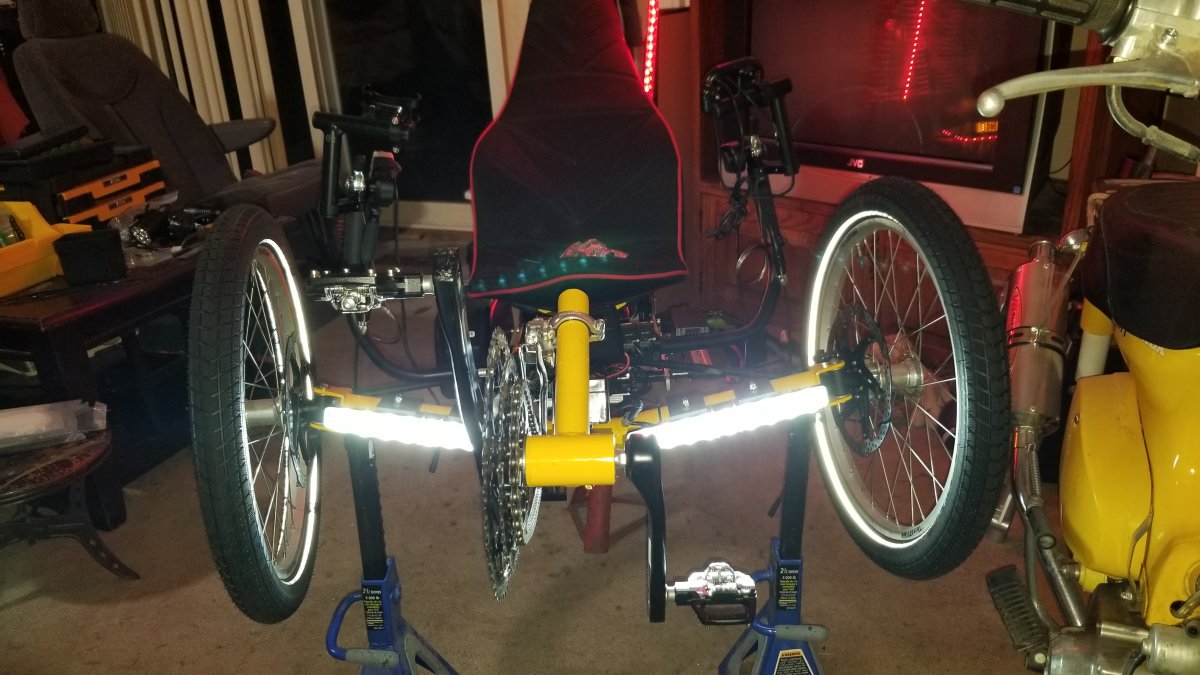 Getting down to Detail points - the nitty gritty of putting it back together.. appropriately enough, starting at the rear wheel. One of the hard-stops of putting the rear wheel on, was the oddity of the rear axle, vs the drop-out recesses to retain the original quick disconnect pinch axle. I could put it on, without the insets, but the Magic Pie spacers sat crooked and part out of the recess - no good. I had to spend an afternoon grinding down a pair of washers to make some custom recess inserts, in order to give the rest of the axle assembly a 100% solid contact to the drop outs. for the torque arms and the Jesus nuts. No way for the rear rim to skip out on me now... Bonus - i've now got a ready made tab for a rack assembly, over what was there already... if so desired. 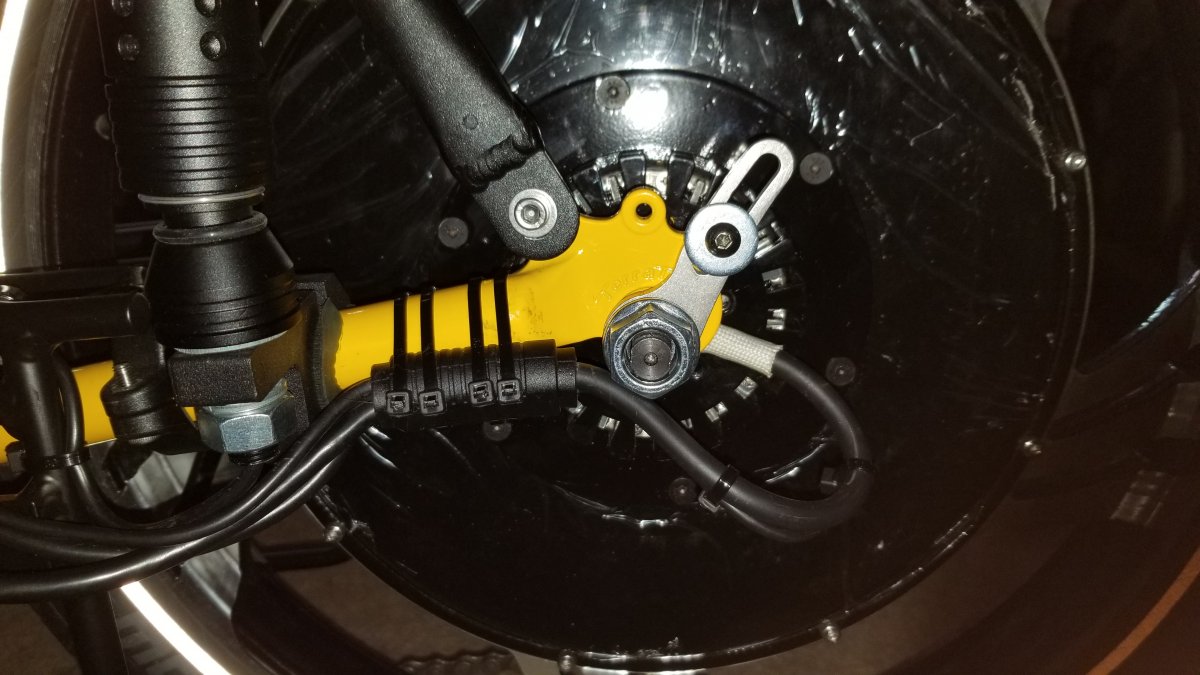 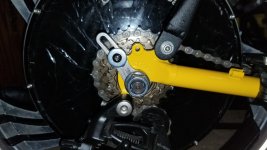 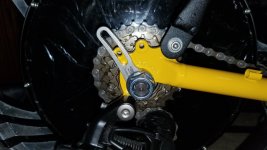 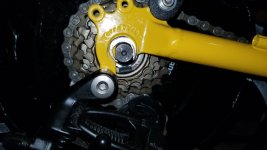 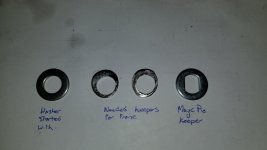 Another no money mod, coming out of rooting around in the scrap/spare parts bucket. I knew my questionable choice for a whip was going to be problematic. It's heavy, and it will pivot on the rear frame, unless restrained. When the whip isn't desired - it's a quick disconnect item .. and as such, the mount addition accommodates that.

An early 70's motorcycle Clutch Cable guide meets a joiner plate to a miscellaneous frame clamp pulled off a scrap wheelchair, years ago. Never throw anything away, Kiddies.

This keeps the whip positioned, laterally supported, and pushes it away from the riders head. Most important mod of all, getting that Canadian flag up there.
: 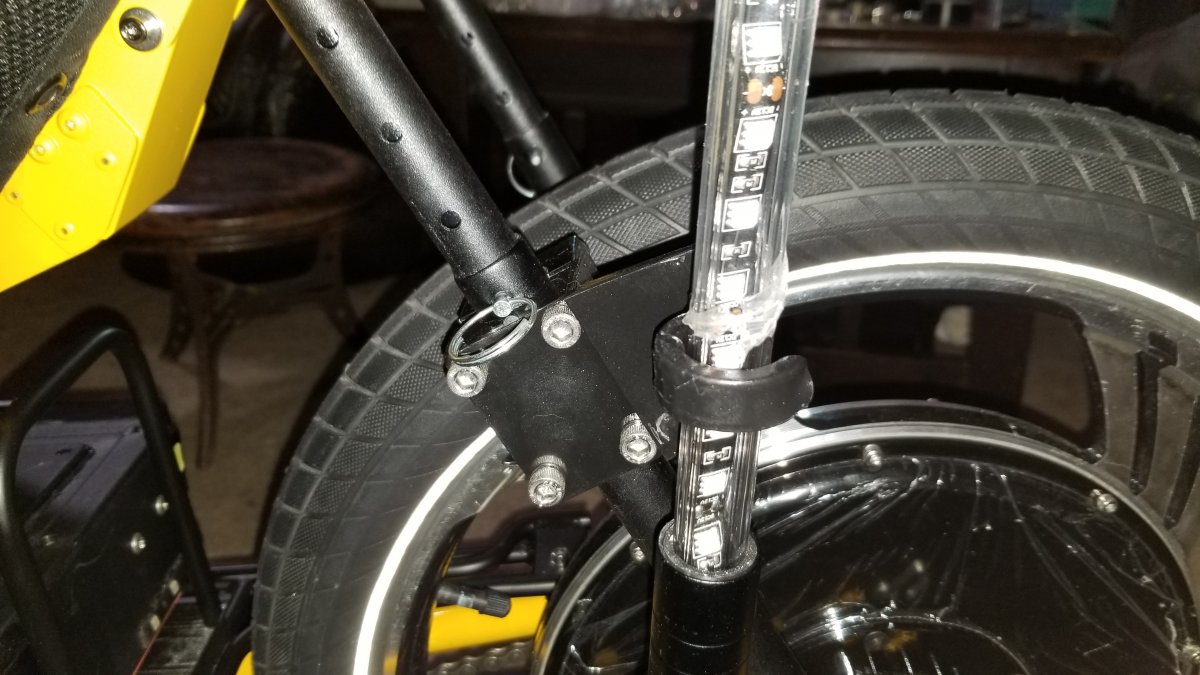 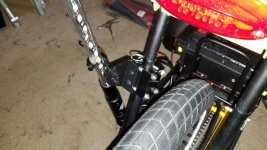 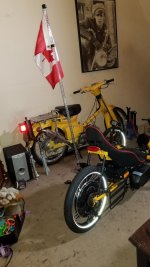 I'm really only held up now, by a set of handlebar grips still inbound, before i can turn attention towards final cable routing. I am going to need to get creative, when it comes to the rear shifter/derailleur.

HackD said:
I don't even know what a bec is.. i only just discovered the voltage down-converter buck, and thought that was the greatest thing since sliced bread..!

Working with what i got, now.. and i'm setting things up to be modular plug and play with my build in that department, so that enclosure or contents thereof, could see replacement/modification as desired. All just about the product components i am aware of, and learning!
Click to expand...

Here is a simple inexpensive Step down Regulator that should work for you. Specs are 36-60 vdc input output 12vdc 10-20 amps. Price $19.95 for US Seller. https://www.superbrightleds.com/mor...D4EP_4vSUYkeGl3VIVlzdQM4i0BccvrhoCQWgQAvD_BwE
H

Hoggdoc said:
Here is a simple inexpensive Step down Regulator that should work for you. Specs are 36-60 vdc input output 12vdc 10-20 amps. Price $19.95 for US Seller. https://www.superbrightleds.com/moreinfo/installation-power/step-down-dcdc-voltage-converter-3648v-36-60v-to-12v-power-reducer/3645/7755/?utm_campaign=Child+-+Organic+Shopping&utm_source=More+LED+Lighting+>+Installation+Supplies&utm_medium=LVC-48V12-10A&gclid=CjwKCAjw-qeFBhAsEiwA2G7Nl2V8BN387lcN4MPJvXhRs1D4EP_4vSUYkeGl3VIVlzdQM4i0BccvrhoCQWgQAvD_BwE
Click to expand...

I'm happy to report, that i am perfectly happy with what i've got going on now, in the above posts with the 48v->12v converter, since bulk of what i am running is LED's - it's output is 250w. Well within my parameters.

Cooling turns out to not be as big a concern as i had thought. originally. We'll see when i put a sustained load on it, out in the August sunshine, but so far it hasn't peaked above 27 deg C with fans off. This includes a 6 hour period, in which i had forgot to shut the master switch off, and as such the down converter Buck was sitting powered up for that period of time off of the battery.

I moved it from the living room, to the garage this morning, for final assembly. I had to remove the wheels from it to get it out of the living room/back yard, and as such, couldn't install brakes until then. Now i can. 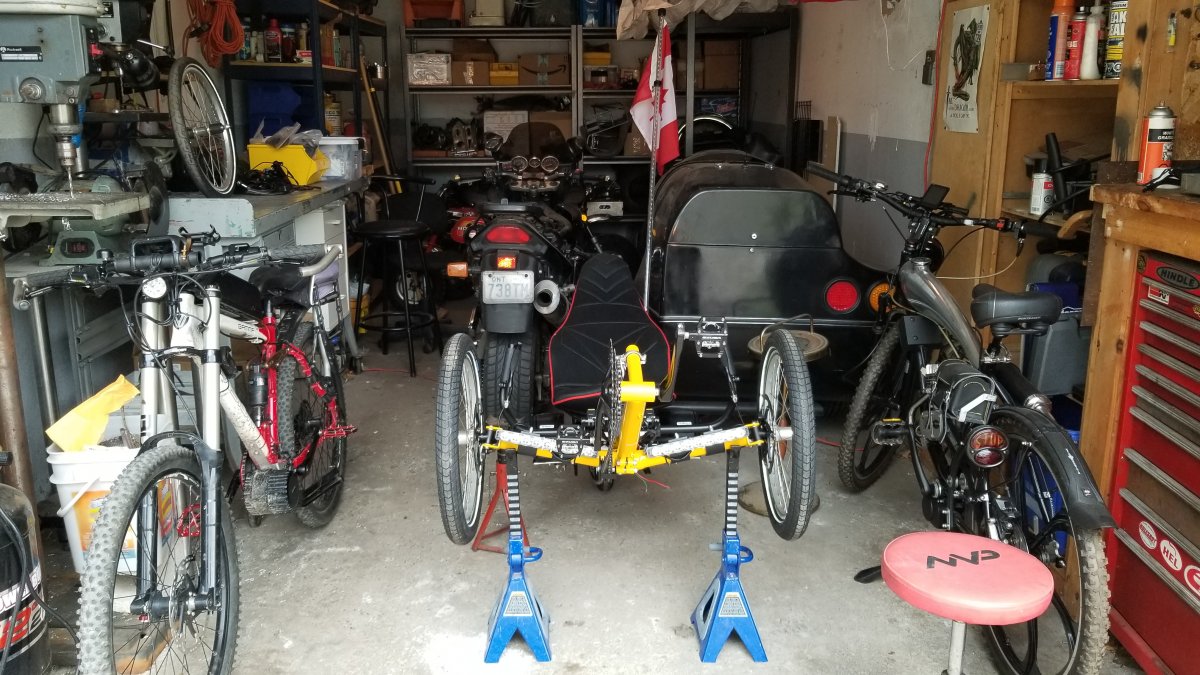 I pulled it off the Jacks today, and gave it a first time pedal-around the condo subdivision stuck in one gear, listening for any groaning, creaking/rubbing issues - none so far, which is good. It rolls pretty good, for something that's gotta be pushing over 100lbs now. Not bad for my first real ride on it, unpowered or powered.

Waiting for those handlebar grips to arrive, is killing me... 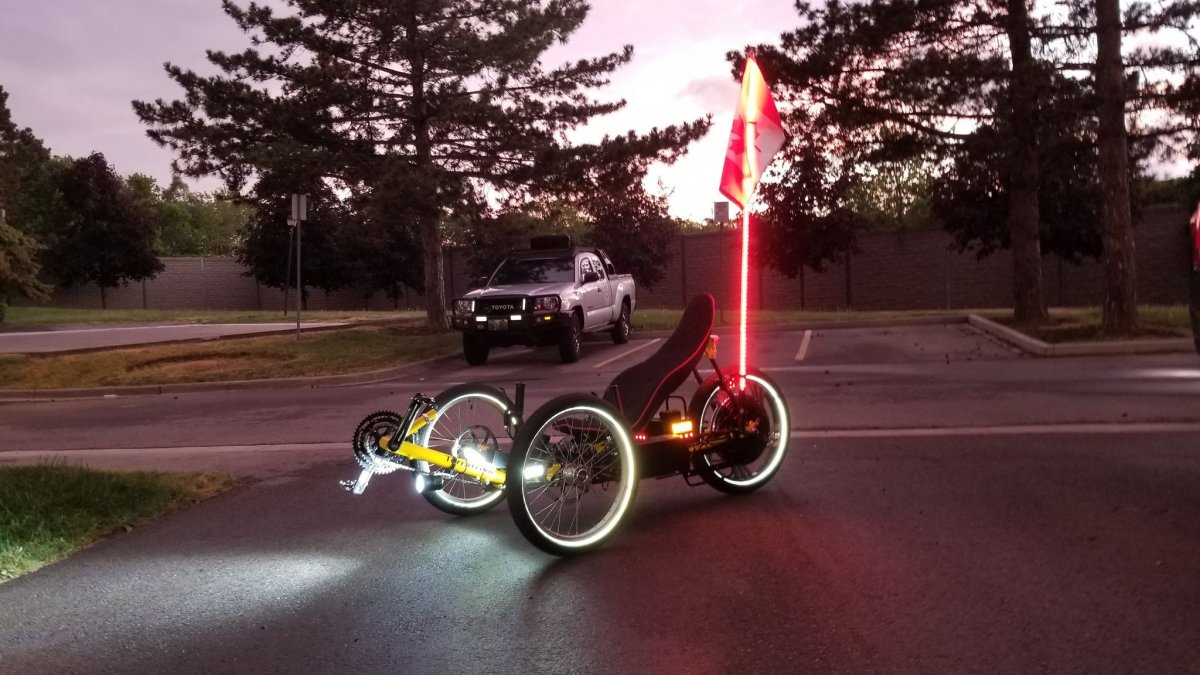 Controller is DOA.. as such, it has to get RMA'd.. delaying completion of this project.

I ain't happy with Golden Motors, at this time.

HackD said:
Controller is DOA.. as such, it has to get RMA'd.. delaying completion of this project.

I ain't happy with Golden Motors, at this time.

I want to know how you got it out of your living room, LOL. Beautiful build hope it works for you.
H

Hoggdoc said:
I want to know how you got it out of your living room, LOL. Beautiful build hope it works for you.
Click to expand...

Hah! That had me a bit concerned also, but i did manage the task myself - i hadn't assembled the brakes as of yet, so a simple matter of pulling the front wheels off, and wheelbarrowing it out the door on the rear wheel, and hooping the front end around the door jamb going outside, repeating again for the garden gate.. both openings significantly narrower than the front end, even with wheels off.