These are available on Amazon for $1400 US. Currently, there's a $70 coupon, which pays for the $30 FedEx Ground shipping from California and a bit toward the sales tax. I bought with my Amazon Prime VISA card to also get the 3% kickback. There was a promotion to split it into 18 equal payments with no interest.

So as not to drive the price up on Amazon, here is the link on heybike's website: 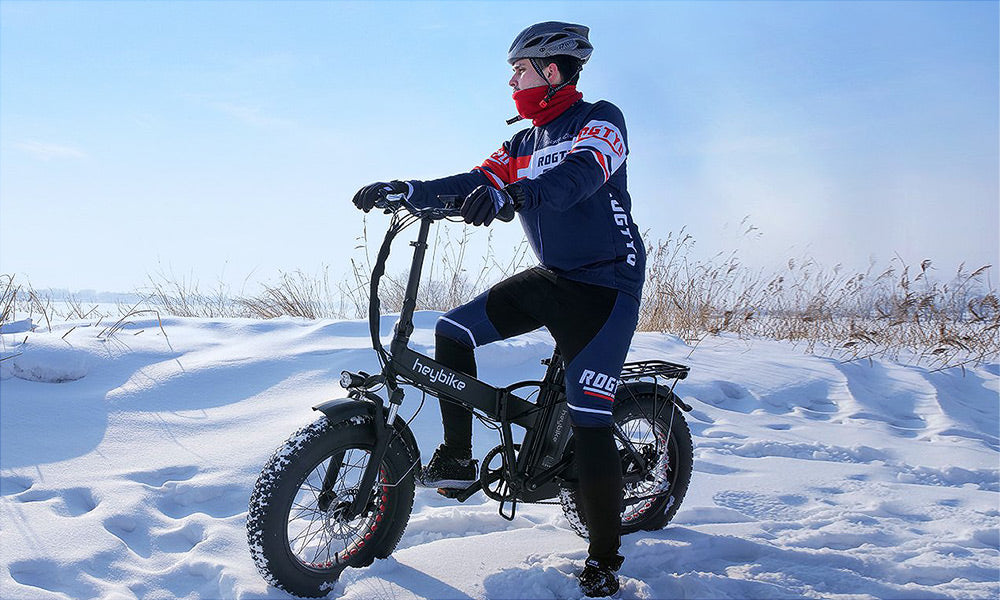 Get Your Accessible and Affordable Electric Bikes from HeyBike. Check Out our Adventurous All-Terrain Fat Tire e-Bike: HeyBike Mars and the Perfect e-Bike for the City and Suburbs: HeyBike Cityscape. Our Premium Quality e-Bikes come with a One-Year Warranty, 30-Day Money Back, and Free Shipping.

Basic specs:
The bike is available for the same price directly from HeyBike's website, but I felt more comfortable buying from Amazon, in case I needed help with customer service. Also for the 3% kickback. HeyBike should reduce the price when bought directly through them, as they won't have to pay Amazon a portion.

I'm going to look a little and see what tools I'd need to change an inner tube on the roadside and order a spare. I have a feeling it's going to be complex, for the rear...

The thing that surprised me so far is that when I pedal at all, the motor kicks in to take me right to the top speed of the PAS, rather than providing a boost proportional to my effort. Someone posted an FAQ video that explained this type of system. It uses a hall effect sensor instead of a torque sensor, like the fancy Trek e-bikes.

Also, I wish I had thought to look up this bike's weight. 71 lbs. is too heavy to reasonably and regularly be loaded into a car or to take along on mass transit. I may end up buying a smaller, less expensive e-bike later for that purpose, but I'm going to enjoy this one for awhile.

I've got 180 miles on the bike now, mostly doing my 4.4 mile daily commute, with a couple longer trips thrown in. Here are my updated thoughts on it and commentary about whether I'd buy it again:

Ratings are on a 10 point scale.

SEAT: 6. Not awful, but I wouldn't call it good either. I'm good for about half an hour on it. (admittedly, I'm not a serious cyclist) I had a Brooks B67 (their sprung model) and it is an improvement in terms of hot spots, but needs a bit of cushioning around the rear edge.

TIRES: 8. No problems or flats yet, so they must have some kind of puncture resistant belting in them. They're 4x20" fat knobbies. They're noisy and I don't go off-road, so I would have rather had 2.4" hybrid tires for better rolling efficiency. These fat 20 PSI knobbies really drain the battery when cruising at 20 mph. Pedaling doesn't help much; the motor is working HARD to keep me going at that speed.

PEDALS: 5. They squeaked like mad; seems like they forgot to grease the ball bearings. I rode it that way for probably 50 miles before I felt compelled to fill them up with 3-in-1 oil. That quieted them right down. They are folding plastic pedals and I can feel them bend a bit when I stand on them. However, they have never given way before.

BRAKES: 5. They're strong enough, but they screech badly. I wrote to heybike about it and they sent me a video on how to adjust them. I did, and they still screech loudly. Now, they're starting to pulsate, as if I somehow warped the brake rotor. (I don't brake often or hard enough that this should be a concern)

LIGHTING: 10. Very well done. Easy to aim and powerful enough to help me out in the dark up to about 15 mph. Having the brake light flash when I brake is a nice touch; I feel a bit safer with this feature in place.

REAR RACK: Very sturdy. I zip-tied a milk crate to it and it is sure nice to not have a sweaty back all the time now.

VALUE: 5. I get the impression Lectric is a higher quality brand, and their XP 2.0 would have saved me a couple hundred dollars on a similarly-spec'd bike.

WOULD I BUY IT AGAIN? Probably not. I bought it having visions of folding it up and taking it with me places, but it's too big with its fat tires and too heavy at 71 lbs. If it's not going to be practical to put in the trunk of my car, I would have been better served with either a lighter, smaller bike or a full size, non-folding model with narrower full size tires. A regular commuter bike, something like the Rad City 5 but a bit cheaper. (and open up the wallet to the tune of another $700) The screeching, low quality brakes are a constant reminder that this is a ChiComm bike. On the other hand, the power system is plenty strong.

1) Look at the weight, keeping in mind that a typical mechanical bike weighs around 25 lbs. The heavier it gets, the more screwed you are if you run the battery down. Also, the more expensive your rack is going to have to be if you want to take the bike with you. The fat tires are also going to be a limiting factor...

2) Be realistic about what speed you need. 20 mph (Class 1 or 2, in the USA) is plenty fast, since you can maintain it going uphill. Many bikes will go Class 3 speed (28 mph) but are not geared for it, so it's a pure electric battery-drainer at those speeds. With this 500 W bike and its 48 V, 15 Ah battery pack, I'm flying up hills that I would be going 4 mph up on a purely mechanical bike.

Let me know if you have any questions.

The bike still satisfies. Only the brakes are an issue. They screech still, but it’s getting quieter. I think the front rotors may be warped, as it has that jerky feeling while braking.

I went to the grocery store yesterday to pick up 20 lbs of ice and a few onions yesterday; the milk crate I zip-tied to the rack works great. 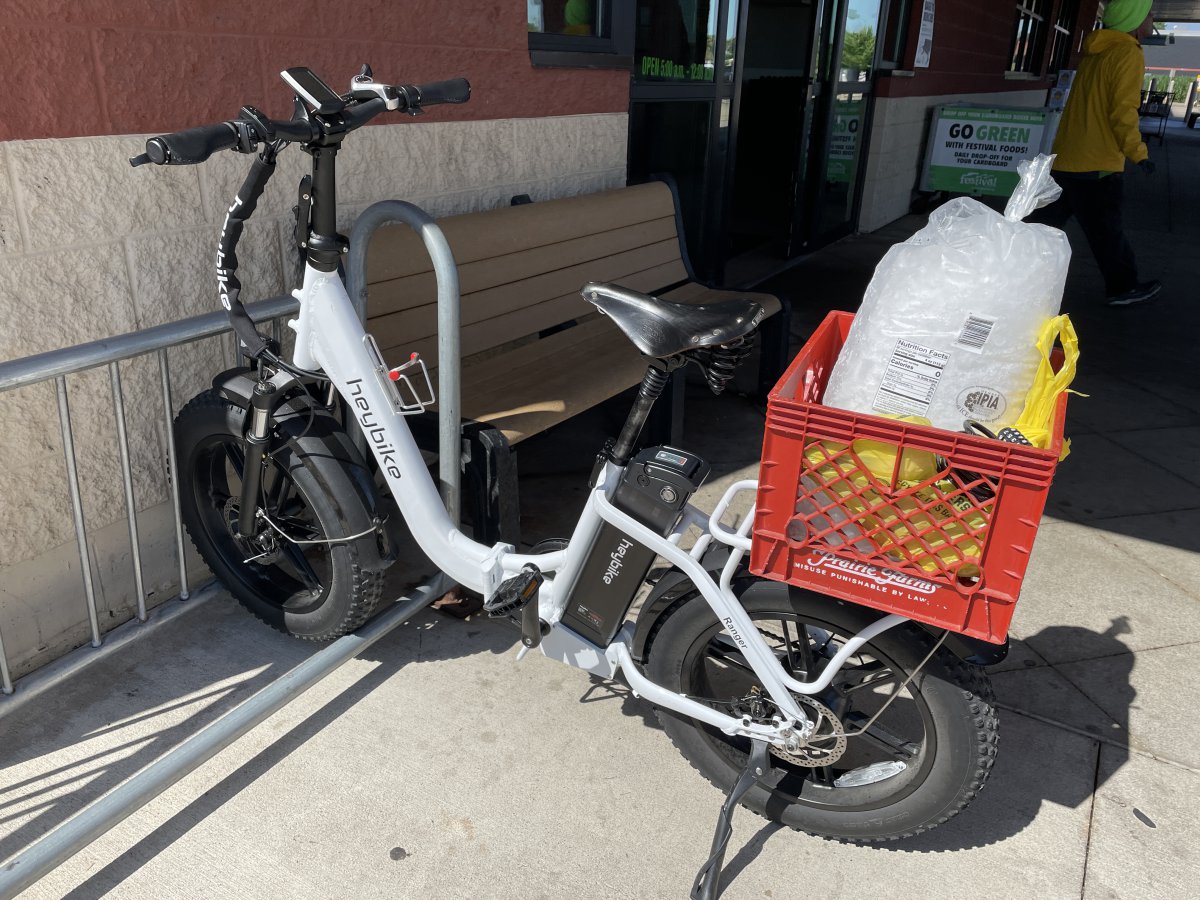 I lost the pedal on the Ranger on the way home for lunch today. It just felt like it snapped off. I racked myself a bit when that happened, as I was pedaling pretty hard and going 23 mph.

I parked the bike at the other side of the intersection, and had to wait for the lights to go and retrieve the pedal. It was in good shape, it had just unthreaded itself.

If you remember, when I got the bike, the pedals squeaked annoyingly, as if they neglected to grease the bearings when they were built. My solution was to put some medium weight 3-in-1 oil in them. They stopped squeaking shortly afterwards. That oil got down into the threads in the crank arm and let it unscrew.

I tried to screw it back in with my hands at the roadside, but couldn't do it. I threw it in the crate and went home the last mile on pure electric.

I got home, cleaned off both sides of the threads with rubbing alcohol, then re-assembled it with blue thread locker. I will be keeping an eye on it. I will probably also remove the left pedal and give it the same treatment, so I don't get another unpleasant surprise.

I'm a little surprised this happened, as the threads are directional, such that pedaling forces would tend to tighten them, rather than loosen...

I realized one nice thing about this bike is that the handlebar stem is inherently strong because it doesn't telescope. It has sort of an upright riding posture, but it is nice & solid.

I took this for granted at first, but by comparison, the stem on my Sailnovo and Lectric XP Lite are a bit flimsy. (though adequate)

I'm at about 245 miles now. It's a good overall bike, the the brake screeching is still going on strong. I don't really want to spend more money to upgrade the brakes to hydraulic two-piston units, so I guess I'll cope.

The power system is strong and the key location is more convenient than on my Lectric XP Lite. It's easy to get to and works smoothly.

The range is holding on strong. It doesn't need charging that often, despite having inefficient 20 psi fat tires.

The XP Lite is a nicer quality all around. I wish I had bought the XP 2.0 instead of this.
S