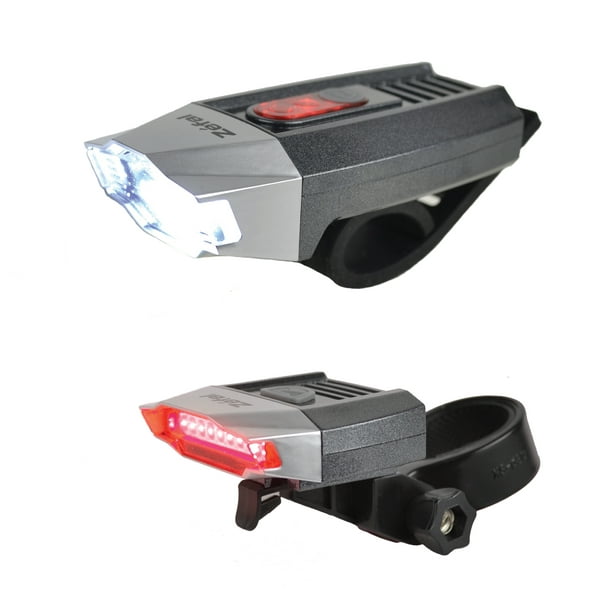 A brief opening note about the "Real World Reviews"

In the early years of doing reviews on the Candlepower Forums it was well worth it to graph out runtimes and other specific scientific measurements even if the homebrew equipment was crude and the methodology was somewhat questionable. These days many fellow "flashaholics" have developed very sophisticated and detailed methods for measuring nearly every conceivable technical aspect of the illumination products on the market. The "Real World Reviews" acknowledge the existence of the detailed technical reviews and I will link to them in the review if I can, but I will not re-hash all of the technical data. Instead the focus of the "Real World Reviews" is to take that "laboratory" information out into real world conditions to give the reader an idea of how the numbers translate into actual use.

Technical Review (done by someone else):

This review is a little different as I'm focusing on a Headlight/tail-light combo for a bicycle which means it has a slightly different set of parameters than a handheld walk-around light. A bike light needs to make you visible, especially from the sides, and also needs to give you visibility ahead for a further distance than if you were walking. On foot being able to see ahead for 150 feet is "nice", on a bicycle it's the bare minimum you can have to ride safely. A bicycle light is also commonly mounted to a hard-point on a bike and thus also needs to withstand a lot more constant jarring/vibration/slams and bumps than a handheld light.

What you get:
Initial Impression(s):

As you'd expect for something bicycle related, the units have fairly lightweight, all plastic/rubber construction. Both front and rear lights felt very well constructed and solid. Attempts to bend or twist the units were futile, there were no creaks or flex that indicated poor construction. The "Manta" design looks pretty cool to me and I like that the lenses have slight side panels to help with being more visible to traffic from the side. Rubber switches and caps covering the USB ports seemed of decent quality.

[Headlight] Single click that cycles HI/Eco/Strobe/Off
Power and charge level is indicated by a pair of red/green LEDs on the top.

[Tail-Light] Single click that cycles Steady On/Strobe/Off
Power and charge level is indicated by a green LED under the rubber switch.

[Headlight] Manufacturer lists 200 lumens. This appears to be approximately correct. Tested runtime in HI was 55min and in ECO was 2.25 hours.

[Tail-Light] Manufacturer lists 80 lumens. This appears to be approximately correct. Tested runtime was approximately 5 hours in both steady and flash mode.

In this instance we discard the "standard evening walk" in favor of an 8 mile bike loop where night illumination varies from fully streetlight lit all the way to completely unlit country road. Traffic on most of the loop is minimal but there was enough to gauge the effectiveness with regard to motorist visibility. My speeds riding this loop range from 10mph to an average of 15mph, with a brief 30mph downhill.

All other lighting on my bike was disabled at the start of this test-ride. Both front and rear Manta lights charged from a standard micro-USB cable without drama though the rubber covers were difficult to re-seat properly so could be a moisture/water risk. The lights mounted without any issue and were very secure while retaining the ability to be quickly removed if needed (to recharge or to avoid theft). The tail-light, it was bright and judging by the reaction of cars it was plenty visible. There really isn't much else to say about the tail-light so from here on I'm going to focus on the headlight.

Once aimed, the headlight stayed put providing a steady aim point ahead of the bike. The beam had a center hot-spot providing some throw, and also had some nice side-spill. In spite of vibration and bumps the light never flickered or dimmed on me, it just worked. During the "dusky evening light" part of the ride, it was obvious that the strobe mode enhanced my visibility to motorists and pedestrians. Unfortunately that is pretty much the last positive thing I have to say about it.

They claim you can "see up to 200 feet" with this light but it was useless past about 50 feet [NOTE: For cycling I consider 150ft to be the BARE MINIMUM distance you need to see ahead at night]. The light quality is terrible. Very blue with lousy contrast which made it hard to differentiate bad pavement from good and impossible to spot overhanging vines or tree branches especially when I got up to 10+ mph speeds. On the 30mph downhill I re-activated my actual bike lighting setup for safety because this light was completely inadequate.

My typical ride is 40 minutes and as I finished the headlight battery indicator switched to it's blinking red warning. The light level stayed pretty consistent up until the 42 minute mark after which it dimmed noticeably. This is not nearly enough runtime for any night bike rider. If I had had to pause to fix a flat or for whatever other reason I'd have been out of light before I finished my ride.

As something to make you more visible during a dusk or lowered visibility situation this kit would be adequate, however I consider a 2hr runtime at no less than 600 lumens to be the absolute minimum for actual night-time bike riding on the street. With the inadequate light level and surprisingly short battery life I cannot recommend this light at the $30 price point. You would be far better served to jump up into the $60-$70 range and buy something like a Cygolite Metro Plus 800 or if you can spend a bit more something like the incomparable Lezyne Macro Drive 1300XXL.

1 Photons (out of a possible 5) (not recommended).