Does anyone else keep track of their power usage on rides?
Over time my power usage in watt hours per mile have been creeping up and the weight of my bike has slowly increased as well. Is anyone else experiencing this and what do you attribute the power gains to?

About 90% of my riding is on multi-purpose trails or roads and only 10% single track.

I always pedal, never throttle. I put in whatever amount of power I can. I am not into E bikes to eliminate all the exercise and I like to extend range. I put in about 120-150 watts per hour riding. I can ride 11-12 mph (17.5-19 kmh) consistently without assist on level ground.

I think the creep in power is associated with creeping up in speed on my normal bike path/road rides. I don't think I have increased speed on single track much.
Weight can be another issue with power creep. I run both wide and narrow tires with little difference in power consumption. I think this is due to wide fenders keeping frontal air resistance area about the same with narrow or wide tires.
Come to think of it wide fenders also brings up the idea of slowly increasing frontal area for wind resistance.

One thing I have observed. Power usage is definitely higher the colder the temperatures are. I am assuming because of battery sag, larger frontal area with clothing and higher friction losses. In the winter time my power usage can be 20-25 watt hours per mile (12-15 watt hours per km).

Well, in writing this out I have a better handle on where the creep is coming from. I guess I will look for ways to make the creep go the other direction for more range. My normal battery is only 1,100 watt hours so my range is limited more than I would like.
S

I like some of your statistics on watts used. As far as winter riding goes, I find the damp ground is the main factor in using up my watts but also dense air is a factor. That said I love winter riding in TX cause it's like 65 degrees.

For my purposes, riding a 70# bicycle just isn't what I'm in to the sport for. My suggestion would be to build a WW Levo SL and ride single track. But that's my desires, not yours.
P

Winter riding here can require battery heat so I just went ahead and wired up heated saddle and bar grips while I was at it. Nice and toasty.

Right now I am looking at shifting a lot of weight to a Bob type trailer that I can pull for the longer excursions. I am planning on doing some remote touring on my fat bike setup.

One of the strangest things I am toying with right now is climate control for mid day hot weather riding. You can get cold water refer units that weigh 4-5 Kg (8-10 lb) that pull around 100 watts on 48-52 volts systems. All you have is a flexible tube lined light vest and pump the cold water through it. Instant AC on the bike. Units are about the size of a lawn tractor battery and cost $360. This setup would also be great for hot weather tent camping. Just wear the vest to sleep.

The floor of my trailer will be a large capacity battery. I thought I had that solved but my order was canceled. Might have to build that battery (around 5KWh). In all actuality though, I don't know how bizarre I want to actually get. Might be accused of being a wee bit over the top.
P

After posting this thread I got serious about figuring out the power creep dilemma. I have found out that the creep was just a combination of many things.
One of the biggest was isolating a problem with the accuracy of my watt meter. The watt meter is reading about 10-11% too high on actual power usage. I am now aware of it but don't know if I will actually do anything about it.
I also went after rolling resistance and wind resistance. I removed the fenders but gained very little noticeable improvement so I put them back on. I removed the rear saddle bags and gained some improvement at the higher end of the speed ranges but not that much.
A big change was changing the tires out. For my narrow tire I was running a Maxxis Minion DHR II 29 x 2.4 that came with the wheel set. Nice tire that set up tubeless but high rolling resistance. Probably great for single track but I bought the wheel set to run pavement.
I replaced the Maxxis tire with a Schwalbe G One All Around 29x 2.25". The difference is a lighter feel and 2.5 mph faster without the bike powered up. A jump from 11.2 to 13.7 mph average. That is enough to reduce my power usage by 75% on the group rides I do three days a week. Low speeds as average age of the riders is about 76-77. I'll have you know that I saved 1.5 cents worth of lectricity today. At that rate I can pay for the tires in 54,270 miles. All good conversation stuff as some of the guys are retired NASA engineers. Arguing over not being worth more than two cents worth of electricity is all in good retirement fun talk.
All kidding aside, the G One's are far quieter, roll much sweeter and give a far better ride than the Maxxis tire did. I am pleased with the change. I also bought another set of Jumbo Jim's for the fat rims and the power dropped on the fat wheels as well. All very positive changes.

Another positive change has been warmer weather. The bike just rolls better and delivers more power from the battery with summer temps vs the cold weather our spring has been. Our wind has also died down quite a bit with the warmer weather.

All in all I was able to get the power usage back down to where it use to be. Amongst the NASA engineers I now have enough battery with 1,100 Wh to get to the moon and back without busting the power budget. Years of retirement will bring out some of the damnedest trivial conversations imaginable.

I used the 3M strip and the fatty stripper tubeless system for the first time with the Jumbo Jim's I won't be going back the ghetto tape anytime soon. Very slick system.
S

I enjoyed your nerd analysis.

I am aware of how absurd it really is but it's nice to know what the real effects of what you do have on your e bike's range.
S

That's the thing, I love 'Bro' science and definitely wasn't being derogatory.
It sounds like a conversation I'd have.
I've experimented with roll down test on my own bike testing ideal psi, tread patterns, etc.
Good luck.

I would love to see this bike!

I try one with wide tires and one with narrow tires. I ain't too good that this stuff. 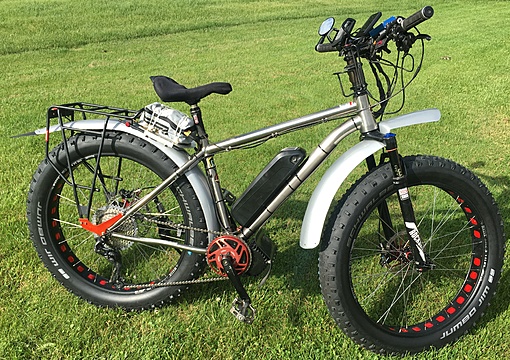 That looks like an army mule of mtn bikes!! Thanks for sharing! Cool ride! 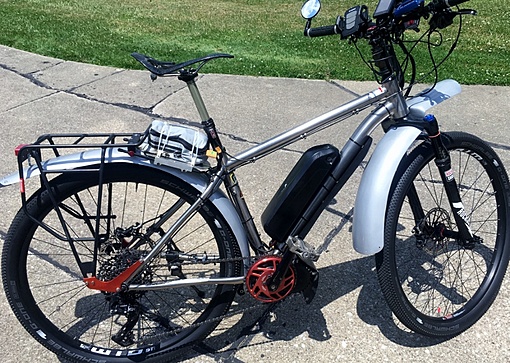