So, I just ordered one last week that is expected to arrive today. I can't seem to find very many reviews except for a few YouTubes. They all seem to be fairly favorable, but I'd like to find a forum for these things. Any suggestions- or di I miss it in the lists?

Sooo... no threads on these, or no interest? Thanks Wheelbender6. I'll give an opinion at 120 miles - which isn't much, but here goes...

I'll skip the un-boxing and assembly, which is pretty straight forward. I have a lot of miles on traditional bicycles, so I know the mid-range bikey parts will do: Tektro dual piston hydraulics, Acera shifters and deraileur. Very good tires, although way too fat for efficiency with a battery or quads. I'll use them up then switch to something in the range of 1.7". Mozo forks, but I've never had shocks before, so I can't say too much. They do work and they do react to adjustment.

The frame is impressive. Everyone seems to mention the beautiful l weld finishing on the Aventon Level. These are quite nice as well. They didnt finish the welds at the bottom bracket or the tail tubes, but no big deal. I don't know if the Aventon has that either.

As a trucker, I don't like "stealth" bikes, so I added some white DOT tape to the frame and patches on the wheels to show a circular movement in headlights from any angle, and white flickers at 90degrees off the forks. My homeward ride is getting dark. I've done this to many bikes over many years. It works. Slows 'em right down most of the time.

I tossed the saddle immedeatly, because that 's what I always do. I put my trust Brooks B-67 on it, which is perfect for the posture. The pedals are toys. They got tossed, too. I put my 40 year old MTB platforms on it because they have bearings that can be serviced, and they fit my big workboots better. With a 62 pound bike to pedal if that battery goes TU, I don't want any friction from the pedals. Can't wait to wear out those bigfoot tires so I can put on some slicks

Fenders are minimal for water deflection. Real weather fenders need to be much more encompassing around the tires - especially the front one. I added a long weather flap to keep grit from accumulating in the works - and especially from getting up into the open down tube/battery housing. For some reason, who ever made these did not see fit to spec a weather plug down there, so I just taped it off with a good quality electrical tape. All the wiring comes out of that opening from the control unit. I assume that part will be hard to come by should it short out. The unit is not waterPROOF, just water resistant. I also coated the control unit male prongs with dialectric grease to prevent corrosion caused shorts or sparking when I lift out the battery, which I avoid. I charge the battery in situ.

The open down tube bothers me somewhat, but I can work around it. It's the ONLY thing that I say is a weakness so far.

Road handling is awesome due to the weight. I take my turns fast and the front wheel does not skate or even feel like it's going to leave the slot. No wobble or instability at any speed, including 34mph going down a 1.8 mile long hill from work under pedal power alone.

My commute is short, but intense. 3.8 miles isn't much, but the first two miles is roller coaster along a shoreline here in Puget Sound, crossing many ravines. Up and down. The last 1.8 miles is that hill, with a gain of 250ft. Not terribly steep, but constant. I used to ride it daily for fitness. The route's a battery hog, with me weighing 235, plus a working man's lunch, and complete raingear for a trucker, flat fixings and such.

So, I get three days on a charge - or, about 23 miles with the 7+ miles round trip. This last weekend I ran back and forth along the 2 mile roller coaster stretch to test that part without the hill, and I got 33 miles til the battery dropped to 20%. Not bad for my load - and the heavy, fat, sticky tires.

The hub drive seems adequate. I know that people have strong opinions on Drive vs Hub, but until I break it, it's fine. I just hope it lasts at least three years. it seems that there aren't a whole lot of honest long term use reviews out there on very many Ebikes. Maybe they're too new and not that many people have racked up miles? 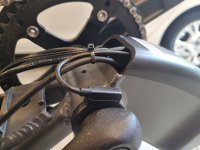 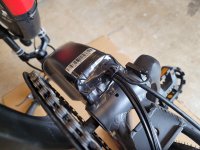 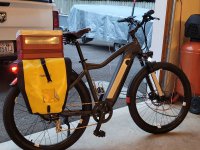