2.4 lb lighter, and a standard crank interface, so no more $130 chainrings.

Finally!!!!!! The old one was not really competitive anymore.

2.9KG (down from 4KG in the old Performance CX line)
Regular chainring (no small sprocket like the outgoing model)
New chassis
Almost all resistance removed after motor cut off
All new 600Wh power tube battery 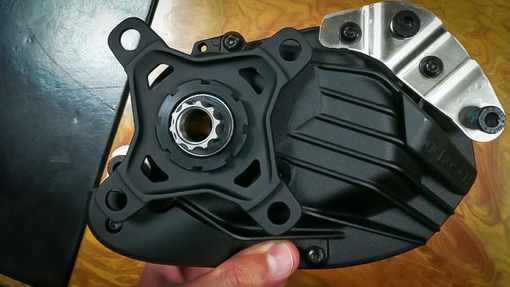 I have two Bosch bikes and the actual operation of the motors and batteries is great. I have three major complaints though:

1) By far, the biggest issue is noise. The gear whine is just too loud.
2) The tiny chainrings wear too fast and are too expensive to replace, especially if you have a bike with boost spacing that requires "$pecial" chainrings. Haibike wants $130 each, I think Trek is the same.
3) Obviously, the weight is a little excessive at this point.

Other than that, the current system is really, really good. I've had zero hiccups electronically on either of my bikes, and I've ridden them *hard* offroad. eMTB mode is sweet, the batteries don't rattle (if they do, check your foam tape under/around the battery), and the system provides great torque. I honestly have no complaints about drag when pedaling without the motor. Let's hope the new system rides as well as the old, losing 2.4 pounds would be great, and hopefully it won't be as noisy.

I am kind of surprised that Trek has stayed with the current Bosch system in the face of the new competition, but maybe they knew the new system was coming soon.

It is Yamaha's turn to downsize and improve.
M

It's just .4 pounds lighter then the Yamaha PW-X, so it's basically a wash between the two.

What's bothersome is that higher capacity battery is not reverse-compatible; so to all of those powertube buyers who went all-in with the 2018 Bosch models, you are out of luck.

And that there is the problem faced with all ebike owners as our bikes age out, yet still run fine and require maybe a higher capacity battery to increase our range; the manufacturers aren't looking out for past buyers of their product. It's more about sell-sell-sell to the new guy in the showroom.

More and more I'm liking the external battery on my Haibike Full FatSix.

But it's all good, competition breeds a better product. This is all like the old Ford vs Chevy vs Mopar talk in the car world.
F

Agree on the batteries. Not backwards compatible. That is one fault of Specialized too where the batteries have the brains (levo 1.0) and are so expensive.

YT Decoy has pledged to make batteries that are generic and always reverse compatible. I think it's 540wh and they will make a 750wh soon at a reasonable price. Around $500. they said they will consider making a 300wh one to drop the weight for short rides.
F

Very much agreed. It jumpstarted the industry!!!

The torque was bad but they fixed that in the CX line.

The small chainring...12 tooth is terrible for mountain bike full suspension. And pedaling in general. They have gear reduction in the BB that added more drag.

Battery was just ok, even the internal. So heavy and not high capacity.

This new one is awesome it seems. Trek bikes really, really needed it since they are single sourced with Bosch.
R

I am glad they lost their tiny gear wich was a no-no for me.
Now if the noise is reasonable i will give them a look.
*** The terrible getting old, poor resale value is pure evil ***
I will not buy any expensive Ebike because in 3-4 years nobody will want them.
J

Interesting to see how fast the ebike technology is evolving.

One signal I see is Surly (a conservative school of engineering) getting into the game with a Bosch powered Big Dummy..

No mention of any engineering details with the new 2020 Bosch unit..
Like whether or not the 2020 new motor can be retrofitted into an existing frame designed for a Bosch motor.

I reckon I'm gonna hold back for my first ebike and see what develops in the next 4-5 years.

Maybe some Tesla EV tech is going to filter into the ebike biz...

A fingerprint reader locking device for an ebike would be very cool...

Maybe and autopilot...and communication with Tesla autos to make sure they don't run over any bikes...
F

On the one hand there is going to be so much R&D and tech turnover in ebikes. On the other hand... there are a lot of folks going in to try looking for a deal on a used one.

If one is concerned about resale values, I'd say stick with the big brands, popular options.

The key is if you buy an ebike today. Use it... everyday, all day and get your money's worth since in three years, they're gonna be tons better. So the value is in the usage, not equity.
Last edited by a moderator: Sep 6, 2020
S

Whoever brings a lightweight retro fit medium power e-drive that you can bolt to a standard bicycle is gonna sell a ton of them.
To me that's where the big marketing numbers are, 2 bikes in one.
H

Two bikes in one is essentially the LaPierre E-Zesty:

You can remove the motor and battery in seconds. However the Fazua system cannot be retrofitted.

Unfortunately, not available in the US, although I read that Fazua is gearing up to sell in the US.
R

I totally agree with you.
If i pay 6000$US tomorrow and use it daily like 1,000 days i got my moneys worth if it was not expensive to run.
But i live up north so 2 bikes is a minimum for year round. When i buy i consider the resale value so often i buy used.
H

Seems like many of the new Mtn e-bikes that appeal to me are Shimano assisted.
Riding a Bosch CX the last 3 years with its small chain ring issues makes me wonder if the the new Bosch with normal chainring size will become a contender with Shimano?
Any idea why the Yamaha assist has not been a major contender with the Bosch CX or Shimano since it has had a normal chainring size all along?

Since Bosch is leaving behind the small chain ring, it seems they will need more internal gear reduction, which means more potential gear noise or are they able to develop equal torque at a lower RPM without as much internal gray reduction
R

Some times it is a regional thing. In your area a brand might be popular and in my area it might not be. Haibike offers some Yamaha and in europe Haibike is well knowned, well respected and i guess well distributed. Last winter some days 4 out of 10 fatbike in our trails were fatboy by Specialized but across Canada nor north america they do not have 40% of the market.