Looks like bikes direct has a new release Hal E team coming soon. Shimano 12 speed with A new frame design and a few other upgrades over the old Hal E. Anybody have any more info other than their mediocre website?
C

Is it the Shimano 8000 still? I don't rhink anything was wrong with the last version. I got my BH by mail order and saved big last year but after having it I may make my next one a Specialized just to have a local dealer.
C

Have you had specific issues with your Hal that make the idea of local dealer support more attractive? Or just to have that knowledge/support for ongoing maintenance, etc.?
C

Mine is a BH. Yes and no. Its easier for them to ignore you when its all via email vs face to face. BH isn't great with customer service. I have gotten bikes from bikes direct in the past and they are flaky too.
W

Really wasn’t posting this thread to discuss the merits of buying from bikes direct or your LBS. I know of maybe 20 of the original HAL E bikes in service amongst many friends and I have heard virtually no complaints. One heck of a nice E bike for the money. I think supporting your LBS is also a very important thing to do but again don’t want to make this what thread is about. The new team version is what I’m interested in finding information regarding. They switched the sizing from centimeters to inches which is kind of odd. What size would you order in relationship to the old one? The spec appears to be 100% Shimano XT 12 speed parts. Even the hubs are Shimano XT. That all seems pretty good. Thank you.
N

I bought mine last summer and have over 900 miles on it and had no issue and except for having to lube the chain more often than my Stumpy. Great bike for the price.
V

That geo table that they provided looks like nonsense to me. 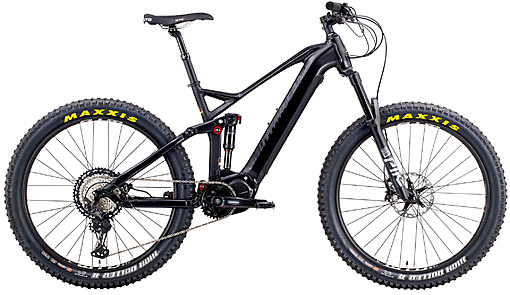 STA looks pretty steep, considering the tip of the saddle is almost right above the BB despite the setback.

Chainstay looks pretty long, considering how far the tire is from the chainring.

Front center looks pretty short, based on how much space is between the crank and front wheel.

The kinematics looks like it has high AS that steeply drops off (higher than prior gen), and anti-rise that starts low and also drops off, with mild progressivity (less than prior gen).

Single piston brakes with 180mm rotors... yea, there's a bunch of stuff I'd upgrade. It has XT hubs but that's no surprise considering microdrive. spokes and rim not really confidence inspiring, but any hubs are better than the self-destructing Novatec D162SB ones.

A
Looking for help on mid drive with bullet battery