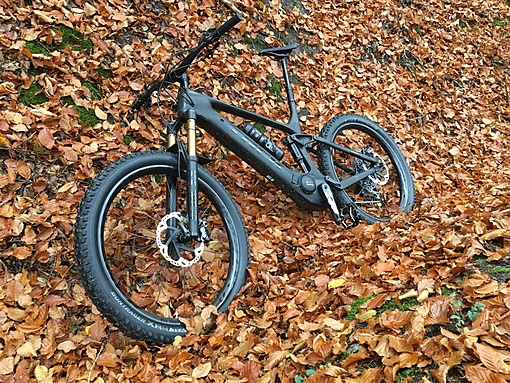 The bike is a dream: superb suspension, fine handling, sensitive yet powerful brakes and the motor pulls you up like a bungee rope when you need it.

And as I was hoping: very well riding without motor support! (Of course, it is heavy then)
Last edited by a moderator: Aug 19, 2020
S 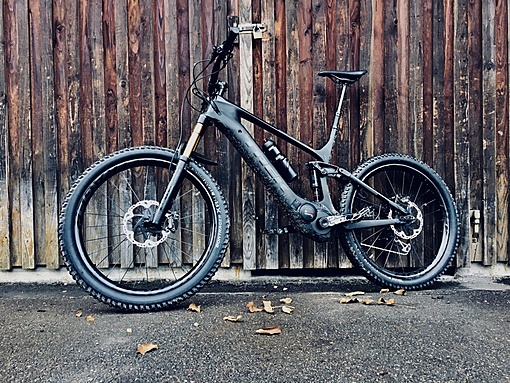 Thx.
Trek designers have done a outstanding job.
I personally prefer it over the Specialized Levo (which is a great EMTB too, no offense!)
B

really well specd bike, looks fantastic. Surprised they're not offering a larger battery capacity though, given the new models with larger batteries from specialized, rockymtn and Bulls(?).

nice to see they put really good brakes on there too, 4 piston XT.
H

Nice spec, and Trek is great about their frame warranty if needed.

Those four piston XT brakes are great, they come on the Shuttle.

No idea why you'd want a bigger battery, it just adds weight. My wife never uses all of her battery on all day rides, even multi day trips work out great with a single charge.

There are vehicles with bigger batteries, just saying ...

So not to be too critical, but folks looking at bikes like the Shuttle or the Powerfly need to understand the geometry before plopping down thousands of dollars. The Shuttle has a 435mm chainstay, which is typical for a 27.5" non-e trail bike, whereas the Powerfly has a 475mm chainstay which is very long for a trail bike.

This is written very often.
Bike behavior attributed to the single chainstay length.
One has to note that, other than a classical trailbike, this one wants to climb a lot!

My Trek Stache has 420mm chainstay.
Yes, it does manual easily, but when climbing, the possible incline is limited.
N

It’s not just some arbitrary measurement. Chainstay length determines how a bike handles. The reason I brought it up it is because of the significant differences between the two bikes and how that affects handling.

The reviewers also brought up the same issue in the review of version one of the bike (aluminum) in hopes that it would change, but the Carbon frame continued with the very same, very long chainstays.

If people would actually demo these bikes in the riding conditions they habitat, it would help guide their choices, but alas, most buyers do the parking lot test, hence the importance of understanding the numbers as a way to guide decision making. A 475mm chainstay bike is not going to be agile, no two ways about it.
S

You'll have a ton of fun exploring your trails and the bike's capabilities!
B

smaller people, like women, can do fine with small battery, but really battery and ebike performance is closely correlated with the size of the rider. and last I checked human beings come in different sizes

More things to consider:
- voltage sag. I find getting down to the last 30% of the battery, there is significant sag, such that turbo mode gives out about the same performance as eco mode does when the battery is full. So that battery capacity is not really as useful as the liquid fuel in a gas tank from top to bottom.
- Plus being lithium battery, it is healthy to not drain it really deep.
- Further, as the bike ages with hundreds of charges, the loss of capacity will creep up. If the battery is bigger to begin with, then say in 5 years a 750WH battery might have the same usable capacity as a new 500WH battery. Thus you still have a usable bike and not faced with the necessity of sourcing and paying for a new battery.
- weight on an ebike is not anywhere near the considerable difference like it is on a non-e MTB. In fact in some ways it helps for handling fast chunder
- And finally, these new generation eMTB with bigger batteries like the Powerplay and the Turbo Levo actually weigh in at roughly the same as most 500WH bikes from the year before. The 2170 cells really help for this.

I know you've pined for ultralight eMTB in other threads. I think they are a cool idea too, more for XC riding, flatter trails. Interesting new tech emerging with ebikes that can transform into non-e MTB in a few seconds will be something to watch. But for high mountains, steep stuff, the big watt-hours will remain insatiable esp once you try and compare.
B

As time goes on with eMTB's things will become more clear in regards to their power to weight to amount of range ratio. Handling issues for both up and down needs will balance out also. As in is it important for overall handling to have the shortest chain stays or the lightest weight? Personally after many miles of riding my POS kit bike on varied terrain my observation is that it is still not the bike, but the rider who will ultimately make the difference.

Energy use while riding as noted is dependent on the overall weight of the bike/rider and their demands on the system. Ride in turbo all the time and you'll use more wh/mi, ride in eco all the time and you'll use less. The balance is to use the energy to accomplish what your personal goals for any given ride are and that only comes with experience based on what you are riding and where you are riding it.

Wh/mi is the equivalent of mpg in the world of e. If you have a 500wh battery and use 10wh/mi you could figure that you will get 50 miles of range and that seems to be the calculation that many manufacturers base off of. But as BCS noted voltage sag reduces the available energy as it is depleted and that has a huge effect on overall range as the ride goes on.

In the real world 15+wh/mi is more the norm dependent on the factors mentioned so right away you are down to 33 miles of range and accounting for voltage sag probably more like 30. There is really no way to fudge the numbers here as all the current mid drive systems run at about the same amount of efficiency but are also dependent on the amount of energy/watts the rider applies while under way.

As far as the upcoming switch from 18650 cells to 2170 cells it will be the most significant change in the foreseeable future for eBikes. Here is a comparison I made up last June when I started to look into this based on a 48v/15ah/720wh battery: 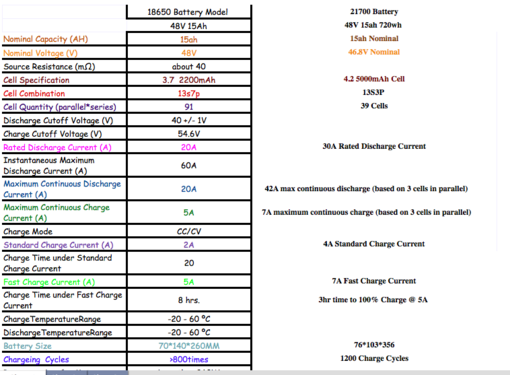 Performance numbers aside, which the 2170 cells obviously outperform the 18650 ones, the amount of cells it takes, 91/39, is the reason for the 21700 battery to weigh less yet perform as well or better.

Unfortunately going forward because of the cell size difference it will be a hard fix to adapt 2170 cells to existing enclosed 18650 cell systems. I don't think the manufacturers are losing any sleep over this because it means that folks will be back to buy whole new bikes that want the upgrade and that is how the bicycle industrial complex rolls.

That Trek looks like a fine bike though, very sleek and sexy and I'm sure will provide many miles of smiles, long chain stays and all.
Last edited by a moderator: Aug 19, 2020
K

I haven't tested the Trek yet, but I tested a few Haibikes with the Bosch engine last week.
I couldn't do wheelies on them even though I had it in power mode.
I then tried a Merida bike (lesser in my mind than Trek) with Shimano engine and that was crazy simple to do long wheelies. I think the reason was that the Shimano engine engaged almost the exact same time that i pedaled my self while the Bosch engine was slower to react. What are your thoughts?
B

delay in throttle onset was/is common to many ebike systems. known to have afflicted the Turbo Levo prior to the 2019 update too. Just one of those things that is evolving and being solved by brands trying to best each other.

but as for wheelies - that could be a chain stay length/seat tube angle issue, gearing, how well the bike was fitted. So many variables.
K

Yes, but I guess it is even more important to dona proper testride before you buy an electric MTB.