Because they claim the front will roll over more things and the back is more nimble for switchbacks etc. Also, shorter chain stays. Id try it if i wasnt buried in 29er carbon hoops.
B

I have been running mullet for a few years and prior to adding assist to my bike. My reasoning stemmed from the transition I made from 700c 25mm internal rims to 35mm internal rims and the resulting lower psi I was able to run going from 30psi to 15psi, as well as transitioning to tubeless at the same time after resisting that for years.

However at the lower psi I didn't like having a wide front tire as I found it grabby and not as precise steering as I was accustomed to but could feel the enhanced compliance and overall straight-line traction. After trying all the tires I had around I ended up using 2.3 tire on the 700c rim front and rear.

I was intrigued by the possibility of more traction from a wider tire in the rear and as my bike wouldn't accept a wider 700c I built a 650b i35 wheel and put a 2.8 on it and my psi test put it at the same 15psi I came to prefer in the front. Now I had precise steering with reliable traction in the front and traction and better small bump compliance due to the higher sidewalls, I ride a hardtail, in the rear. As both wheels are very close in diameter it didn't affect the bikes geo enough to tell.

I do admit that what made me originally think about it was how moto's have been setup for years with a larger rim/narrower tire in the front and a larger tire on a lesser diameter rim yet both fairly close to the same diameter for years and in fact tried out the concept when 29" wheels first came out on a DH sled with a 26" rear. 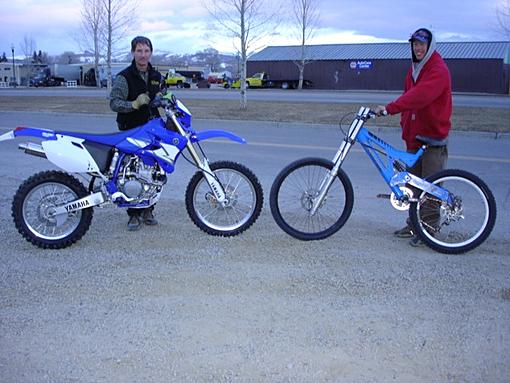 Why the manufacturers decided to go that route I don't know but I wouldn't discount the moto theory along with the fact that their testing proved positive.
Last edited by a moderator: Aug 29, 2020
B

Steber was also claiming that with the Tazer, with the increase in torque that having a bigger footprint out back enabled better climbing traction without spinning out.

Flavor of the month, or a legit reason? Time will tell.
B

Sounds about right, everybody start switching! We need revenue! I’m still getting smoked by 26ers!!
O

It's interesting that almost all other eBikes I test rode (Focus, Levo, Pivot, Trek, COmmencal) with same wheel sizes front and back, they all have this tendency to break traction upfront while going uphill on a turn (regardless of the gradient). It's compounded when on Trail mode too. I don't like climbing slow as I still want a good workout. I like keeping my average at 12-14 mph uphill. So slowing down or washing out the front was quite annoying. I didn't find this as an issue on my Intense Tazer (which I finally bought after a much prolonged test ride). Just still getting used to the pot-belly look of the frame. Otherwise, I've split my time more on the Tazer than my other analog bikes -guilty as charged..lol
L

I also mismatch wheel sizes and tires for some of the same reasons discussed above. Really like the handling. The pic below shows my Levo with a 29x3 XR2 in front and a 27.5x3 Bulldozer in back. I now run a 29x3 XR4 up front and a 27.5x3 Purgatory Grid in back. I put the flip-chip in the high position to "level" things out and to provide a bit more ground clearance. 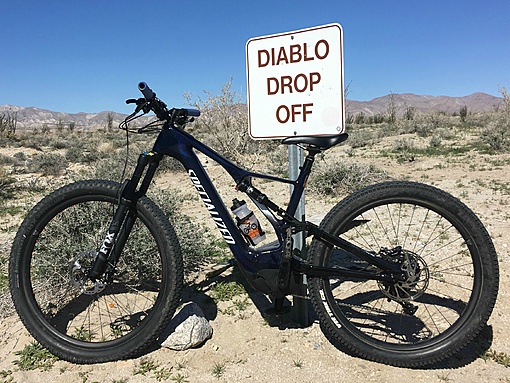