I'm looking for a budget full suspension ebike and these two seem to be near the top of the list as far as value goes. However, I've been unable to find any comparisons between the two. I have read good feedback on both, and it's seems like the Shimano motors are well proven. I have seen some contrasting feedback on the Bafang M600 that the Luna uses. Some say it is loud, but apparently now they have an options where you can upgrade to a quieter gear. I've also seen some comment that they didn't like how the pedal assist works on this motor. These things make me a bit weary of the X1. Otherwise it seems better spec'd than the Motobecane.

If anyone has some feedback they can offer between these two or have other suggestions in the $3k range, it would be greatly appreciated!
J

These 2 ebikes appear to be at $3,450 but very, very different designs:
Motebecane is like a Corolla or Civic (good value and gets the job done)
Luna X1 is like a Hellcat or Corvette with a big engine (fast and affordable)


What MTB do you ride now? Is this your first eMTBb? Are you a skilled rider? Will you be riding sanitized single track or tech rock gardens? Be honest. How you answer these questions will help you decide between these two options.
F

I currently have a Diamondback Mason Trail hardtail for the summer and a Motobecane sturgis bullet fat bike converted with a Bafang BBSHD for the winter. I love that bike, especially how quiet it is. Now I would like to add a full suspension ebike for the summer for some of the trails that are not very fun on an analog bike.

I would say I'm a pretty skilled rider. I race motocross so I'm used to going fast. I don't run into a lot of people that are much faster than me on the downhills, but I have trouble keeping up with the really fit bikers on the uphills despite being in pretty good shape. I live in Minnesota so the trails aren't too crazy...
F

I get that the X1 has better components and will be better for downhill, but it seems like the Hal eboost is pretty decently spec'd and it's cheaper than the X1. The M600 motor worries me a bit about the X1.
J

Since you have the skills, how about adding the Luna Lone Wolf FS Stance 2 to your stable? Fits your budget. Proven Giant platform. Ludicrous upgrade?? Looks like a cool bike - and something different for a change.

I really want something with an integrated motor and torque sensing. Otherwise I would probably build up another one of my own. Ideally I want something that doesn't stick out like a sore thumb as an ebike. Also, I don't need the power of the BBSHD and that much range.
F

For the price of the X1 I could also get a pre-owned 2019 Levo. I'm just not sure I want to spend that much though.
D

That is what I was originally thinking. Pick up a nice used F/S bike and convert with a BBS02 and luna pup pack battery. I just want something that looks clean and purpose built though.
B

Purpose built and less "visible" pushes the arrow in the BD direction. I've seen good reports on the much less expensive Shimano "7000" model if you like to pedal. That would be my choice. I have a spare BBS02 motor and a FS frame to convert, but battery placement and the convoluted wiring from the motor to the battery has deterred me from building.
M

The Crazy Lenny's website has mtb's discounted that beats those two with name brand Yamaha or Bosch E-drives. It's where I got my Haibike Full FatSix a few years ago at about a 50% discount......
F

Thanks for idea! I ended up ordering a BH Atom Lynx 6 27.5 Pro. They gave me a really good deal on it. I was able to get it out for the first time last night on the trail, and it's pretty nice. One major concern though, I was getting tons of pedal strikes. It seems the bottom bracket must be much lower than what I'm used to. Does anyone else have this issue on their Ebikes? Does anyone know where I can get shorter crank arms? 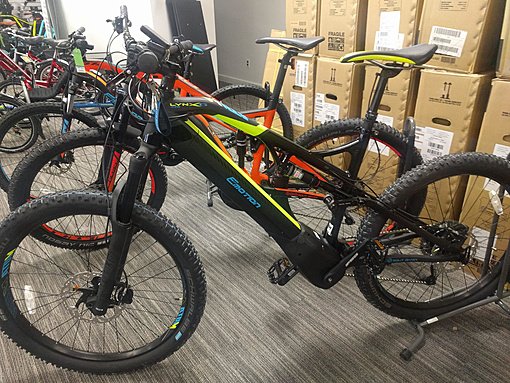 For that kind of money to be spent on an ebike, I wouldnt go with Eric Hicks of Luna Cycle even though by the looks of things, their ebikes look good, but the technology behind them is in question. The Motobecane Hal Boost Team would be a better choice, but if I were you I'd be looking at the major bicycle brands and their offerings of ebikes, over Luna. Just rebranded whatever they can get their hands on to make it look a bit different vs a major bicycle brand that's spent money on engineering and technology, has a network of established stores to help you out. Rather then Eric with his warehouse in California.
J

Did you check the sag?
F

Yes after further research, the bottom bracket is no lower than my other bike,but the addition of rear suspension is the difference. I set the sag before the ride but checking it after it turns out there was too much so that was probably a big factor.

I re-set the the sag and I'm going to try 2.8" wide tires for more height (currently has 27.5 x 2.6". I also ordered some 160mm crank arms. Hopefully all of that will eliminate the pedal strikes.
J

In my experience, you just get more pedal strikes with an ebike. It is sorta normal, so I would just ride the bike as is for now. Keep an eye on the trail and stop pedaling and ratchet your cranks to avoid rocks and roots. Also it is not wise to descend with a pedal down. Keep them in the 3 and 9 o'clock to avoid snagging a rock and throwing you off the bike! Your new bike looks great, by the way. Have fun out there.
F

After doing some research it sounds like you are right, but it was really bad on my first ride. I had to be super careful and couldn't pedal around corners. On downhills I'm always level so not worried about pedal strikes there. I also have a Motobecane fat bike converted with a bbshd and I've never had pedal strike or clearance issues with that bike.
B

I have a 2005 SC Superlight which has been in use constantly since then; it has a low BB and I used to experience strikes. FME, you'll learn to avoid them especially with the alterations.

Eric @ Luna sells junk and doesnt back up anything that goes wrong , why would anyne do business with them ?

Luna finally made good on his warranty , after I filed a PayPal dispute .