I have officially had our lectric premiums for a few days now. Set up was easy, the fit and finish of the frame and welds was very good. The paint and graphics were all spot on without any blemishes. Everything functioned out of the box but one of the screens had been crushed as indicated by the LED backlight showing discoloration. Contacted the company they sent a new screen out within hours. 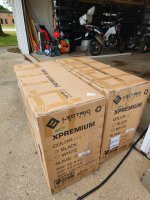 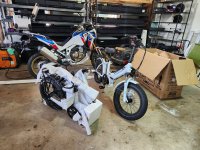 This bike has two batteries but it does not have a linked charging system. It only comes with one battery charger so you have to change battery ports Midway through the charging cycle. They need to include two Chargers if the charging ports are not connected internally. I did end up ordering two more Chargers so I can charge up all four batteries at the same time. 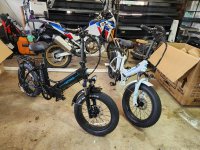 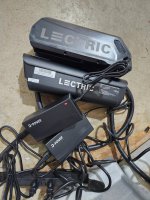 The boxes arrived mostly intact with one box having a major hole in the side. There was no damage to the unit it didn't appear.

It was challenging to get everything set right, the derailers are still not set right if you get the high gears, you won't get the low gears and vice versa. I took this to a professional bike shop after hours and hours of trying to get it right, and it's still not right even after the professionals took a look at it. They did Bend back the brake rotors as they were out of whack as well. 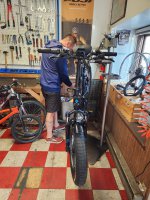 I discussed my trailer thoughts with the bike shop owner and it was super helpful to have someone with so much knowledge to run ideas by. I think I may just end up replacing the derailleur as it's fairly low cost. Or just going to a internal Hub system, which is definitely not low cost. We are setting these bikes up for overlanding so I need them to reliably go hundreds of miles without breaking down or needing much adjustments.
I did get a quad battery balancer and wanted to try to add (2)20 amp hour batteries to one premium, something I've never seen before. However, before I void the warranty, wanted to make sure that the main components are not going to require any more returns. I do have Pelican cases for the batteries as well and generally overall this should greatly increase the range while also taking load stress away from the two current batteries. Keeping the batteries only 85% charged, and never discharging the batteries past 20%. That should give the max amount of Cycles. Eventually I would like to construct lithium iron phosphate cells as they are safer and have more than two times the cycles of lithium ion.

It's been a hot minute since I've owned bicycles, so I was not impressed with the fit and finish of these bikes. Everything was loose even after checking everything. Peddle fell off even, forgot how hard you really have to crank these down. 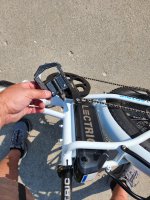 I am 275 lb and 6 ft tall. My wife is 170 lb and 6 ft tall. Our son is 5 ft tall I don't recall his weight at the moment, his XP premium comes today. The weight difference has a Major Impact on Range even when you're in the same gears and in the same pedal assist. These bikes appear to pull from the rear battery before the frame battery until they reach the same voltage. This tells me there's a load balancer built in and I'll see if it's a separate item or if it's built into the controller. I have planned for an external load balancer being in there, but I don't know which one it is so I'll have to report back once I open it up.

Speed and Performance seem fine but these are our first e-bikes so nothing really to compare it to. One of the e-bikes is class 2, the other I've opened up to class 3 to see the difference in performance and there really isn't any, it only opens up the top speed of the motor which isn't significant being only an 8 mile an hour difference at Max. I definitely understand the need for higher top end, but there are a lot of walkers on the same trails we use so I guess I'd rather just not open it up to go faster if it's going to have a negative impact on the perception of e-bikes around here. Image is a huge problem in some areas according to news propaganda, so I don't want that negativity in my little town where most of the e-bikes are owned by older people who seemingly have pretty good judgment around non-motorized Trail users. I would like to start a club here and work with the city to Define the types of bikes allowed so some monster ebike enthusiast doesn't get us all banned from the trails all together. I can see that quickly becoming a thing because through my research of these bikes I have fantasized building a monster ebike and a particular type of tube frame withstand that kind of power and hold that kind of battery. Our Trail systems have a lot of blind corners so you might be ripping around at a fairly good pace and not even know there's a walker around the corner.

These bikes were supposed to come with the premium lights, there's nothing really premium about them. The rear tail light is barely visible during the day and between the two identical bikes, one front light is substantially brighter than the other. I plan on replacing these lights with traditional LED cube lights from the 4x4 world. Those hold up the best with metal housings and just look badass.

I'm quickly realizing that with ebikes maintenance needs to be done fairly regularly. After talking with multiple Riders, I didn't realize how often Tire failures happen especially during tours and overlanding and bike packing. So we are going to have to get a bike stand for working on the bikes and the appropriate tools to remove and clean the components. I think there's kind of a misconception of how long you should go between service intervals and that's dictated by the type of riding you do. These are definitely not mountain bikes and you will destroy them if you pretend they are. Even going down curbs is a lot because these bikes are so heavy. The front suspension doesn't really do much with my body weight so I'll have to rebuild that I'm pretty sure.

These are still very good bikes, just know they are built for flat ground even though their frames are overbuilt like a mountain bike. Their weight and components do not allow them to do any of that stuff a mountain bike can do. As long as you go into this thing knowing that and don't have crazy expectations, you should be good to go. 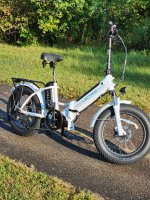 I have filmed a detailed unboxing video and initial review which I will post once it's edited up.

Crap, I posted this in the wrong thread and don't have perms to move to the folding ebike area. Admins, can you please move? Thanks.

Nice review!
Because a lot of people suffer from TLDR (too long didn't read) it's usually a good idea to include a quick summary at the end, I usually just do a fast Pro/Con list.

I would strongly encourage you to contact 'lectric and let them know how bashed up your box was when you got it because shipping companies are really handling these items badly and the packaging by most of the manufacturers just isn't up to the abuse they face especially for a heavy item with delicate components. Manufacturers need to step up their game. I'd say file a complaint with the shipper too, except I have a buddy who works for one of the big names and he says right now they are just scrambling for bodies to move things from point A to point B and they literally can't afford to "call out" workers on bad handling or they walk and deliveries don't even get made.

Added a few more pictures. Will add video and overview next.

100 miles in, and the premiums are working well. Still haven't edited the video.

Any lack of performance for hill climbing (on or off pavement)?

A said:
Any lack of performance for hill climbing (on or off pavement)?
Click to expand...

I'm 6' and 275lbs (well, I was before the bike) and since we have a 2.0 as well, I can say that the mid drive motor does not have as much power for hills, but with the gears, it makes it up just as easily. Our family peddles, we're not a throttle-only type so this works great on hills. I prefer the longer premium that has much more range and comfort over the XP 2.0 Long Range.

What kind/type of mid-drive ebike have you ridden in comparison to your Lectric XP 2.0?

A said:
What kind/type of mid-drive ebike have you ridden in comparison to your Lectric XP 2.0?
Click to expand...

Got a friend to buy one, hers had issues, now I'm obligated to use my parts to make sure she has a good experience.

Son of a biscuit... feels like not a single dang one of these things comes delivered without issues. 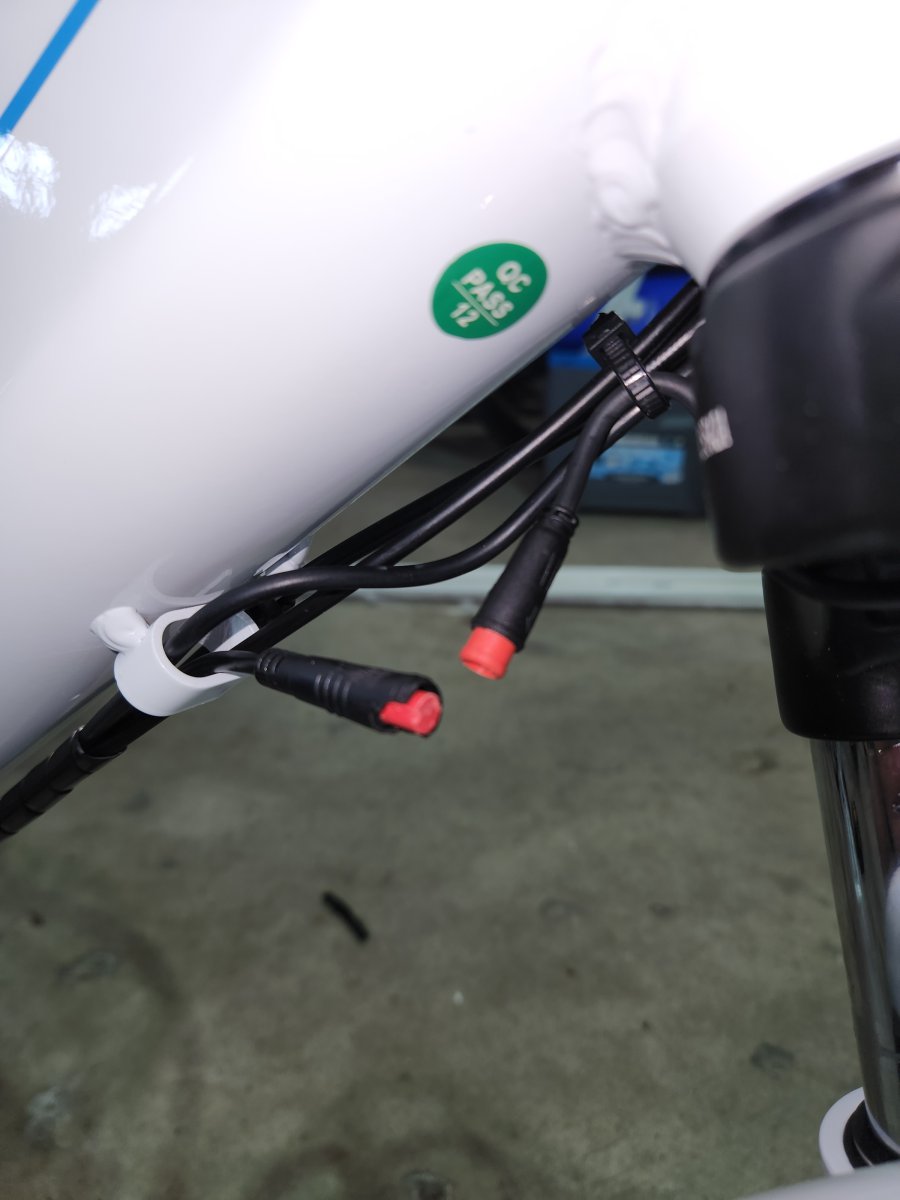