Is an E-Bike MTB faster than human powered Road bike?

Just curious? Is E-MTB faster on the road than a human-only powered road bike? Assuming appropriate road gearing and no speed limiters.

Has anybody raced roadie on your E-MTB?
K

Depends on the bike and the tires.

a 250w e-fat bike is not going to be faster than a road bike.

a 750w with smooth tires will be up to a point depending on if it has a speed limiter, etc...


too many variable to give a general yes or no answer.
V

Class 3 speed pedelecs allow up to 1 HP (750W) of motor assist, at up to 28 mph before cutting off. With a 750W motor, these easily beat roadies. The 250W ones should rival a roadie if a relatively fit person is riding it at a similar intensity level. Road pros might pull away on the hillclimbs, due to having a better W/kg ratio. Range is a factor too.

If it's not a class 1, then the "e-mtb" is something in between a mtb and moto, in a grey undefined area, that is generally not regarded to be a mtb or e-mtb. See the thread about non-class 1 ebikes for examples. Removing the 20 mph limiter immediately disqualifies it as being a class 1 e-mtb, which tends to be the only class of ebike allowed on bike trails, if allowed at all.

Edit: *disclaimer, regarding my big road rides on my e1mtb: I'm mostly exploring new routes, rather than taking planned routes that are optimized for minimal stops and wide bicycle friendly pavement, hence my lower average speed. It's also not calibrated to my wheel, and its power steps down before I hit the speed cutoff; anything above about 18.2 mph is mostly my own power and I tend to not push beyond that, besides on downslopes.
B

I watched an old dude in Europe motopacing a string of roadies on an emtb, so depends on your roadie more than anything.
G

One time I was on my road bike and my wife was on her Levo. We came up to a hill. I grabbed her camelback as a tow and kept pedaling. We passed a rodie on the hill. She was very proud
G

While riding my Levo I've been dropped by regular mountain bikes on technical single track, home brew $600 ebikes on moto trails, a fat bike in deep snow, road bikes, and grandpa on a road ebike. Such is life.
B

My 750w Turbo S Specialized Bike is way faster than a road bike. It cuts out at 28mph. My Levo at 250w with 3.0 knobs would be about the same times as me on my road bike, unless it was a real long climb, then a Levo would drop me.
B

My friends ride their road bikes instead of their MTBs in the road because their road bikes are faster. The sacrifice is ride comfort and flats. I can’t keep up with them downhill where gearing and rolling resistance favors the roadie, but if I air up to 25 PSI and use higher levels of assist, I can hold my own on my Levo. Only really fit riders on a standard road bike can pull away in the hills. The point is that a Class 1 MTB can be quite versatile. Between my Stumpy, my Levo, and a set of road tires for the Levo, I have no desire for a road bike.
B

My hub e road bike is faster, pedals better and more efficient on any type of road and will do mellow trail duty but the mtb does ok on the road and is good enough for accessing trail heads 5 miles away but is much more efficient for off road use. Why I have one of each. 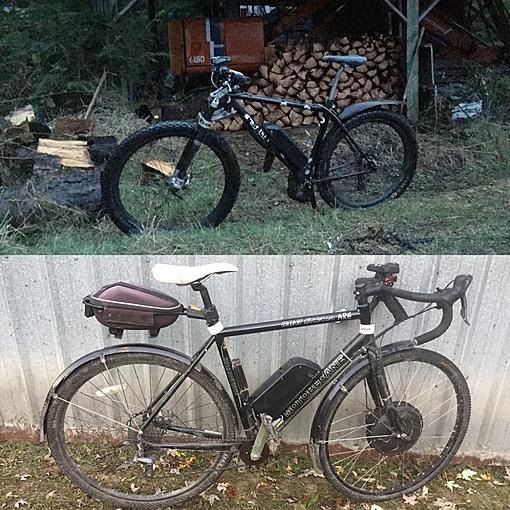 Slower on flats, MUCH faster on climbs. The sweet spot of an e-MTB is right around 8-12 mph.
R

On my Class three Cannondale Tesoro Neo X2 I passed several road bikes on paved trails and nobody passed me in Sport and Turbo modes.

This a pretty good example... Canyon Grail:ON Gravel eBike vs Pinarello Dogma Road Bike. At 10:34 into the video the eBike and Dogma compete on the tarmac.

Is Lance Armstrong on the roadie....?
Dan

B
Importing an E-Bike and US Customs

Where does my E-bike get its speedo data from ?