Hoverboard motor and speed controller not working together. why?

I tried out 2 different electric throttles: Link and Link

Below is a picture of the motor for the wiring. Too blurry to see the string of characters. 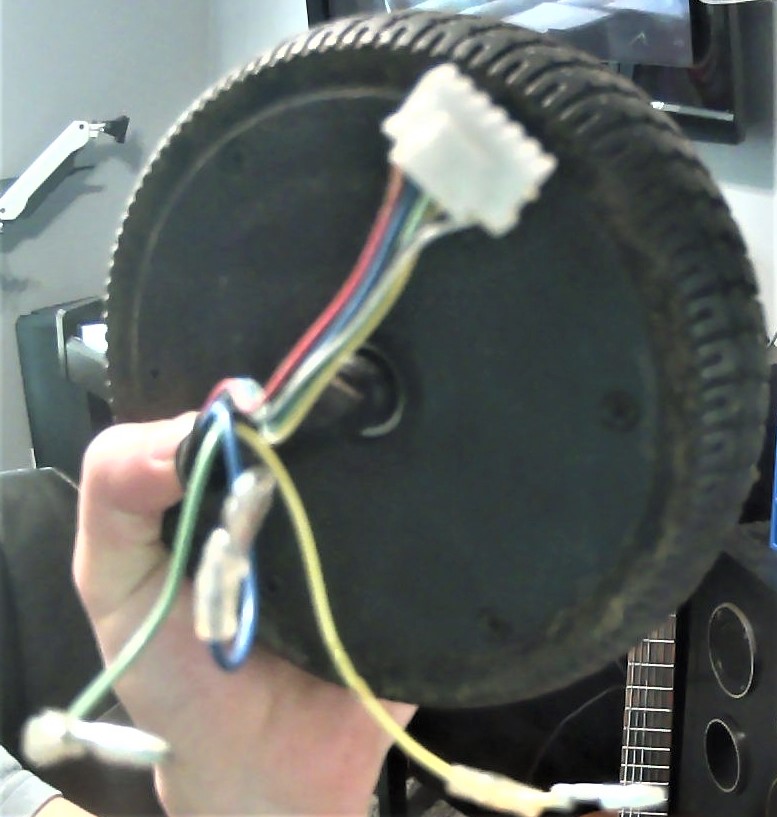 I think I wired all of these things up correctly but the motor refuses to move when I twist either throttle. I ordered 2 of the same BLDC speed controllers thinking the first one might have been faulty but that was not the case unless both are actually faulty. Same with the 2 different throttles. Both batteries are at around 11.85V, barely used and I have not overcharged them yet (as in left them charging for a while when they were already at full capacity). I suspect that I have to do something about those Hall Sensor wires on the motor, but I read online that a BLDC motor should be able to spin without those wired up unless I understood that wrong. Maybe the batteries are just too low of an AMP rating to get it to spin. Maybe I ruined the motor when I connected just the one 12V battery straight to the motor using two of the three phase wires, to see if I still get a reaction from it after ripping it away from the hoverboard. And the motor did jerk but not spin which I'm pretty sure is fine because a 3 phase motor shouldn't be able to spin when wired like that, right? Maybe I read the specification of the motor completely wrong. I typed in the string of characters into google but nothing popped up. I really have no clue what to change to get this to work. I'm planning to use this on a bike (though you might be wondering how. Or not). I would be very grateful for any help. Please feel free to ask me for more information if what I supplied was too little.

Well, if the controller will not run sensorless, and the ad does not say that it does, they you will have to plug in the hall sensors

Also, phase wires are not necessarily color coded correctly, may be some poke and hope involved. Use VERY minimal throttle as high throttle with the wrong combination can fry motor.
A

Nelson37 said:
Well, if the controller will not run sensorless, and the ad does not say that it does, they you will have to plug in the hall sensors

Also, phase wires are not necessarily color coded correctly, may be some poke and hope involved. Use VERY minimal throttle as high throttle with the wrong combination can fry motor.
Click to expand...

I finally got it to work. I plugged in all the hall sensors as you said but the motor still wouldn't spin with either throttle. And for some reason, this motor had 6 hall sensor wires so I just left the white one unplugged which I think was the right move. What I discovered to be the problem were those two throttles I linked because I ordered this throttle (link), wired it up (with the hall sensors still connected) and the motor spun without a problem. I'm so relieved and happy that it works now after spending close to a whole month diagnosing this. I did some more tests to make sure the throttles were actually the problem. What I tested was...

- swapping the current BLDC speed controller with the extra I ordered and using the new throttle that works but kept the hall sensors not connected. I didn't connect the hall sensors this time because I would have to completely change the connectors on both the BLDC ESC and the motor like I did the first time since I didn't have any other ones on hand.
- I tried the other two "broken" throttles as well on the extra BLDC ESC
- I tried the two "broken" throttles on the original BLDC ESC again
- I tried the working throttle without the Hall Sensors connected on the original BLDC ESC

The motor did not spin for all of the above.

I think that what I learned is that if a BLDC motor has Hall Sensors then they have to be connected. But I also have no clue why those two "broken" throttles don't work and the throttle that works does work. Is there anything specific I should look out for when buying an Electric Throttle online?

Should I still worry about the phase wires not being connected correctly?

phase wires can be wrong yet appear to work. High amp draw typical symptom. Wire colors not AT ALL standard.

On the Hall sensors - there are always 5, one for each phase plus red and black for power. White wire either temp sensor or speed. Most motors, but not all, will run without Halls. Get rolling first. Many controllers will NOT run sensorless, some can and will usually advertise such.

The two bad throttles are weird. Same connector? Most are standard, but some have additional features. Chinese quality control.

You are likely correct about the ignition wires, your solution pretty common.

Do a search on phase wire testing, there is a process which narrows down the possible configurations, IIRC out of 36, 3 will appear to run forward, and 3 in reverse, but only one forward with best efficiency. It is a combination of phase and Hall color coding order.

Emphasize care while testing this as the symptom of wrong combination is extremely high amp draw, full throttle can blow the controller. Use very small movements.