Harley is going to be looking to start selling their kids ebike brand at IBDs and at their Harley Davidson dealerships. This could be pretty cool for getting kids interested in biking at an earlier age and make it easier for the parent who wants to get out and ride with their young child.

Having 2 young kids myself, I can say it has been difficult to get miles in on bike rides with them. My oldest, 6, can now ride a proper mtb with gears and all, so able to go a lot farther with him, but if I go to take my 4 year old with us, we don’t get too far. This could be a way to get all family members riding a descent distance regardless of age.

What do you all think?

“Already in 220 powersports shops, the makers of the EDRIVE electric balance bikes hope to be in 75-100 high-end IBDs soon, said Mike Dettmers, StaCyc’s vice president of sales and marketing.

Dettmers said the brand will be in “a few hundred” Harley-Davidson dealers soon. “Our national footprint in all three channels would be somewhere near 2,000 retailers across three industries,” Dettmers said.” 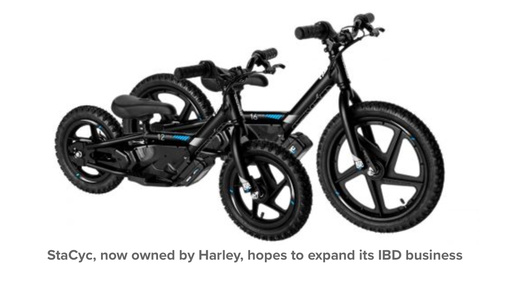 Stacycs are great but they need a 20 inch option
W

I think you have to be 16 to legally ride an ebike here in UT on any public path/park/trail. Not sure in other states but given that UT used the P4B model legislation, I'd guess these are intended for getting kids ready for a KX50, not for riding bikes with the family. They don't even appear to have pedals.

Are we ready to call a throttled bike with no pedals an ebike? How are you going to realistically graduate a kid from that to a pedal bike? I could see some pedal assist being a good thing (though they're selling 5 year olds very short in that article - mine can do pretty long rides with enough snacks and patience), but this is just a very low powered motorcycle for children, not a bicycle.

Yeah the bike path police are going to be ticketing tikes left and right on those.
W

There are already lots of electric scooters for kids out there, for what it's worth. They're not trail-worthy, so there's that. But again, throttles and no pedals... is that the road we want to go down?

The Stacycs can handle trails, you should see my nephew rock it.

Is micromanaging personal choice a road we want to go down?
W

I guess I'll put it another way - would it be ok if this was just a speed-limited KX50? It's a tiny motorcycle, after all. A Sur-Ron shrunk to pint size.

I guess that while I consider e-bikes bicycles, once you remove the actual human power/pedaling entirely, I can't help but think it's out of place in a bike shop and more at home in a motorcycle shop.

If you hope to make any semblance of a coherent argument that ebikes are NOT different than bikes, perhaps you shouldn’t chose pedal-less vehicles made by a motorcycle company as your shining example.

I mean, holy hell, think of the “anti-bike” orgs out there just salivating at the very thought of this.

Generally speaking I’m relatively ambivalent about ebikes and their owners, as long as they are riding legally, but this stuff makes me want to puke. You guys will end any and all hope of Wilderness access for bikes.

Damn, I can't imagine getting all worked up about something so trivial. It must be hard enjoying your own life when you spend so much time interfering with other people/kids having a good time.
L

See, I want to be able to ride my bike in a Wilderness area some day.

You and the e-bike crowd are gong to be a barrier to that.

As someone who loves his e-bike, I have to agree with this sentiment. Sure it's a bit arbitrary, but if the motor runs without the pedals turning that's where I draw the line between a bike and a motorcycle. Unfortunately they both are falling under the umbrage of the "e-bike" label online.
S

Ok, how about we work to focus on talking about ebikes themselves and not legality and ideology? This s**t on this forum is getting really old, and there are people who seem to want to keep it going. I respect your opinion Walt, and often agree with your perspective, but at some point you gotta move on. I did.

My kids strider doesn’t have any pedals and it has done wonders for them learning how to ride a bike. My kids also have a mini electric quad (350w, with real tires, suspension and disc brakes) and this has also done a great deal to help my boys learn skills that will help them on a bike, especially off-road. Also, let’s not forget how intertwined mountain biking is with motocross and bicycles with motorcycles; ebikes are even closer, so time to get over it. Pandora’s box has been opened.

The line between ebike and low “powered motorcycles” or whatever you want to call it is beyond blurry and will continue to get even blurrier. There will never be a fine line. Time to move on and except that as thinking there is anything that can be done to change that is pure stupidity. Sorry, to be so blunt, but s**t this forum is a mess because for some reason there are people that do not have the ability to wrap their heads around that and are stuck on ****ing labeling everything and thinking that others are going to follow those labels.

Here is how it works, and will continue to work: (this has been stated many times here by other users as well) if it looks more like a bicycle than a moto, it is an ebike, if it looks more like a moto than a bicycle, then it is a moto. So, as for whatever non-enforceable law your referring to, it doesn’t matter now, and will never matter, so no reason to bring it up here.

What does matter is that less and less kids are riding bikes. And if this is something that can get kids to start riding and their parents interested in riding with them, then that will do wonders for the future of biking. Calling out equipment technicalities, random vehicle code laws and disdain for those that don’t cycle the way you think they should is only going to hurt the sport of cycling and discourage people from getting into it. Is that what we want for the sport?
M

I’ve seen these out on the trail before. I’d say these are more for the parents so that they can get out with their kids and all can have a good time without much fuss from the kids. These are more like in between a toy and something a little higher. The article goes on saying they weight about 75lbs, so most will be ridden from the garage and in the neighborhoods.
S

Locking thread, this is a toy, not an ebike!