Good news: you can ride from home more and not have to use the car/rack.

Bad news: bike is around 50 lbs and not easy/safe to get on the rack.

How much does your bike weigh and what is your bike rack? How's that working out? What's your plan in the future?


My case, I have a raised pickup truck and mostly use the tailgate pad. I have techniques now... but it's not easy.

Roof rack would be crazy. Hitch rack is good. Thule has a new hitch rack with a ramp.
L

Do what the mobility scooter people do, they seem to get it done.
A

Will the bike rack on the front of a bus hold an ebike safely?

Seems like they should, or they'd have trouble with some classic steel bikes, which are even heavier.
P

No problems at all! I usually remove the batteries to save weight.
A

My 13 year old 1-up USA rack works just fine for my e-bike, with plus tires and all.

In fact, it's not even that much heavier than DH bikes of that era. Not sure what the fuss it all about.

But I suppose it allows the haters to come out of the woodwork with the juvenile mobility scooter jokes.. so mission accomplished!
H

We have a Rocky Mounts Splitrail for a 2" receiver that can carry the two Haibikes. We remove the batteries as well. No problem, even with the 27.5x3" tires that are on one of the bikes. The only downer is that the rack weighs as much as one of the eBikes, so manhandling it into the receiver can be a chore.

Occasionally we will just put the bikes in the bed of the truck with our patented $20 two tiedowns on the saddle rails method. $15 for four tiedowns and $5 for two bungee cords = two bikes. I've been doing this for decades. Put the rear wheels against the front of the bed or the tailgate, and run a tiedown strap from each saddle rail to the tiedown points in the bed of the truck. Run an elastic bungee from one pedal axle, through the front wheel, to the other pedal axle to keep the front wheel from flopping. I've driven 1000 miles with bikes secured like this, and never even touched the straps. Nothing touching the bike other than the saddle rails, the pedal axles, and the soft bungee on the rim. No reason to buy a rack if you have a pickup bed. If you do not have bedliner, put a microfiber towel between the tire and the front of the bed (or the tailgate) where the tire touches.

We only bought the rack because we had a long trip where the bed was full of stuff. Had it only been one bike, we would have put it behind the front seat of the truck, in the cab.
L

The Kuat rack will support four bikes of apx. 50 lb. each.

Here's a pic as we were heading out on a 3 week trip to Utah with two Levos and two Stumpjumpers. Solid. 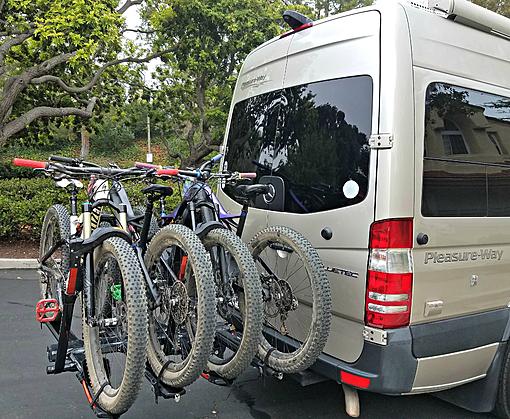 It's not a lot of fuss. But it's fackin heavy. 52 lbs is a lot. I had a 58 lb one. It's right at my limit if I don't have great leverage. End of the day after a big ride, trailside on a slope or uneven terrain.

Think of those with roof racks or tailgate pads. And spouse, kids, folks over 60 years old? Not the end of the world but worth a discussion, options and solutions.
V

I was talked into joining a bud for a post-ride Mexican food, that I couldn't pass up, so I put my 50 lb ebike on his rack and it sagged the rack noticeably. I also sometimes carpool with him with my non motorized bike, since I've been carless for a while, and the difference is quite dramatic.

Once threw my ebike into a back of a pickup bed on its side, and that one trip did more damage to my ebike than all my riding did. Needless to say, I went back to always commuting to the trail head from my front door (~15 miles each way for my 2 most frequent destinations).
F

For hitch racks, make sure they are sturdy. and always put the ebike closest to the vehicle. That's where the rack is strongest and and where there is the least weight leverage.

Tailgate pads are awesome for pickups. But it's not easy to get them up there. When taking it down, slide the bike on the downtube and rest the bottom bracket on the tailgate. Get a good grip and heave. Always use the legs when getting close to the ground.
G

This. I never remove the batteries though. I like to keep the battery compartment and cable sealed while driving just in case.
R

Just got back from a 3 week trip out west with my sars $130 two bike rack with two e bikes on it . its bent now after a trip up sand flats rd in Moab,looking at Holywood e bike rack now

Any recommendations for E-Bike Rack that works well with Tesla Model Y... was thinking Thule Easy Fold or maybe something bit beefier that can carry some gear: two 54lb bikes + battery + gear = 130lbs; Model Y's stock 20" wheels tongue weight is 230lbs - so I've got 100lbs for the rack.
T

CastroSF said:
Any recommendations for E-Bike Rack that works well with Tesla Model Y... was thinking Thule Easy Fold or maybe something bit beefier that can carry some gear: two 54lb bikes + battery + gear = 130lbs; Model Y's stock 20" wheels tongue weight is 230lbs - so I've got 100lbs for the rack.
Click to expand...

Any bike rack which attaches to a tow hitch should be fine for an ebike, as long as you are under the maximum weight. You'll need a tow hitch on the Tesla which sounds like you do. There's a few good one's mentioned above that are working for other ebike riders.

The HoldUp is Yakima’s fastest, easiest way to load bikes. Its beefed-up arm pivot makes it stronger than ever and the side-to-side adjustability reduces the chance for bike-to-bike interference. It’s a road trip companion for life.Holds up to two bikes.