While I dearly love my Pivot and don’t see myself going e-assist on the trail, last weekend at the beach got me thinking about fat tire e-bikes. I saw several examples of these Chinese generic bikes, people enjoying them and got intrigued. The beach I frequent is a few miles long with the only entrance at one end (Anastasia island state park in St Augustine) and treking up the beach a couple miles to get away from the throng is my usual MO. So going further with my stuff on a e-bike sounds like a blast!

As I already have a light and strong (and expensive) bike that I’d never take on the beach, this go around I’m ok going (way way) heavier and cheaper!

I’ve seen many surprisingly inexpensive fat e-bikes on Amazon (Addmotor brand for example) and wondering if any here have any feedback about this genre of casual recreational non-performance bikes. Where’s the sweet spot price wise between disposable and Specialized? LOL Oh yea, I want to stick with 4” tires, on the fence about 20 vs 26”.
Last edited by a moderator: Sep 29, 2020
R

Bought a Rad Fat tire awesome bike, put 500 miles in 3 months no issues, plenty of "support", it's a 1499 $ bike includes shipping,
Lot cheaper ones, if you know your way around them, using common parts Bafang hub motor or keep it non-proprietory , Fat Tire are very simple riding, floats over sand, adds a little cushion, fun

Do not buy any complete ebike. The frames are chininsy! They cheap out to save a few dollars to make more profit. Its a million times better to buy a brand name fat bike, and just buy an ebike kit to install on the bicycle. This guaruntee's that you have a suburb bicycle frame, with excellent components, and great running gear. Then you install the kit and you are ready to go, it is really easy to do. Never buy asian ebikes. Since its beach, I'd suggest you get a direct drive motor and a 36V or 48V controller and a quality battery from a reputable supplier that is known to sell good product. OSN Power is one that comes to mind, Unit Pack Power is another.
P

Taiwan makes pretty good bikes, and more of them then anyone in the world, FWIW. I think my Surly Wednesday may be made there, don't know, don't really care. No beaches where I am (REAL beaches) but my Bafang BBSHD/Wednesday combo kicks butt and is a blast to ride. I do agree with the "build it yourself" thing.
M

Yes, even the majors build bikes for some of the off brands.

I was talking about the ebay/aliexpress/alibaba type ebikes that are sold.

The ebikes sold in bicycle stores would be built good as they need to last.

I wouldnt recommend buying any of the department store bicycles, because I would say just buy a name brand used bicycle. No doubt people have purchased department store bicycle but the department store bicycles are put together by a minimum wage worker who also stocks shelves. Time and time again those bicycles would be missing this or that and the buyer would be wondering why there is no grease in the bb. Some have purchased bso's and taken them to their local bicycle store for a good run through. Same amount of money could have been spent on a brand new entry level Trek from that same local bicycle store and would have a 100000 times better product. For occasional casual users the bso's are at a good price point. Thanks to youtube, those bso's can receive a full run through and greasing. So yes, you can buy a Walmart fat bike, and convert it if you so wish. I am just saying it might be worth looking at a used fat bike that is a few years old. Be sure to thoroughly look at the frame before buying. Parts availability is not an issue, plus the parts are reasonably priced these days.

The SWEET spot for pricing, is to keep looking at the online classifieds for brand name used fat bikes. Do your research on them too. Stay away from those cheap throw away, bicycle shaped objects, disposable bikes on Amazon/Ebay/Aliexpess/Alibaba.

Since you said you do not want pedal assist, then that makes your choice of controller a lot easier. Its just a matter of choosing your motor. DD's are simple, cheap, heavier, coast drag while the geared are more complex, lighter, more expensive and no coast drag. Mid drives use your gear train, more wear and tear, more expensive but great for hills and steep hills.

One of the major bicycle manufacturers builds the Costco fat bike. I had to search to see what exactly a Pivot bike was. Looks like a good bike, except for the rear suspension layout taking up a lot of triangle space, but you said you wont be going to electric on that so fair enough.
B

My brother has beat the crap out of a Surface 604 boar and it’s still rolling. Seriously rode hard and put away wet. I don’t think he paid much for it.
M

I have seen them go for cheap on the used market. There is one store that imports them and sells them, is probably an authorized dealer for Surface. They do look like a nice ebike, but you get more for your money when you build your own ebike. That way you can spend the money where it counts and just use any old bicycle you have laying around. The one place to stay well away from are the generic ebike.
B 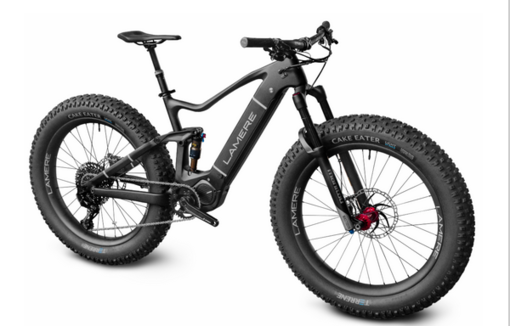 Not cheap @ 8k but looks like, as far as fad bikes go, a nice example. The option to run 4"/27.5 wheels and also swap out the rear end for a boost version and run regular wheels is a bonus.

504wh is not alot considering the loss of efficiency at low temps that batteries exhibit but probably enough to get your toes and fingers cold enough to want to come in anyway.....
Last edited by a moderator: Sep 16, 2020
M

I ride year round, I installed Chromium wire, the kind that vapes use, from Fasttech. Calculate out a certain wattage from the ohmic values and you are good to go.

$8K is absurd, but people that are rich dont spend wisely.

504Wh is probably good for a high level of manual power assist aka sweating. Throw in a steep hill and that 504 is sharply decreased by a lot!

With $8K I would go with a rear hub probably the higher mxus' with a custom built pack from EM3EV using their build methods for 25R cans and a Sabatov or Kelly, of course Sinewave, Regen, and FOC if they have it available. I still wouldnt overdue the bicycle frame platform, of course a FS would be a definate.

I like the idea of being able to slap on fatties 3"-4" or regulars ~2" or even plus tires like 2.25-3.00. Its a cool platform to build on, having one setup for the winter or the beach or out in the bush, then another setup for trail riding or cruising mtb style.

B
Does this bike exist