Hi everyone. I'm new to ebikes and am looking for some advice on my first purchase which, hopefully, will last me a while. But I'm running into an issue between getting a bike big enough vs getting a bike with all the features I want.

I'm hoping to get my first ebike some time in the next few months, and have run into an issue. I'm a taller guy (6'4", 220 lbs) and am used to a 21" mountain bike. I'm hoping to get an ebike for my daily commute (~3 miles of side roads) and would like to be able to use it through the winter in a northern state, so am going with fat tires and slightly more power (at least 750 watt). However, I would also like to be able to use it on occasion for trekking/mountain biking, so originally had having a rear suspension on my check list (after all, if I'm going to invest in a good bike I might as grab all the bells and whistles rather than have to buy a second bike later). However, I cannot find a rear suspension fat-tire bike which comes with a >19" frame no matter how hard I look. I haven't rode ebikes or fat tired bikes before so don't know if they usually fit differently, but based off my mountain bike, I really would like to avoid going less than 21".

Most of the pics I see on this forum are of fixed frame bikes, so do you guys recommend against rear suspensions? I'm not looking to go off of jumps or anything, just something to smooth the ride and make longer weekend/day trips more bearable on the bum. I would like to avoid shelling out for a custom build (~$2500 budget, though not entirely inflexible), and dont entirely consider myself enough bike-savvy to do so regardless. Are there any bikes or companies anyone could recommend to me? Or if I lift the seat and handlebars on a 19" bike, will I not notice the difference?
M

Hmm it might be hard to get rear suspension fat tire ebike in your price range. It's possible they don't even exist and so it could be easier to get what you want by doing your own build. You might achieve higher quality overall.

BPM imports do a full suspension fat tire ebike but they don't list their frame size: 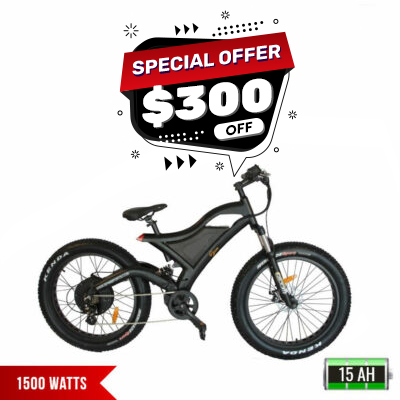 Maybe contact BPM to ask the frame size? It seems like a good deal for the price. It reckons it comes with a Samsung battery, not sure of the motor brand it's not listed. Another member here has a BPM imports dual suspension bike - https://ebikesforum.com/threads/bpm-imports-48v-750w-fat-tire-ebike.412/

Sondors fat tire ebikes are a popular choice for the price - if you're not concerned about suspension that is:

Most common rear spacing for a 4in fat tire?

B
Mongoose Dolomite or Elecony Godzilla