I've done some research and now I'm looking for some confirmation from the hive before I pull the trigger. The goal is to keep things simple and get a little more oomph on my utility bike. I'm often towing the dog in a bike trailer while also having a kid in a bike seat on the back and I'm tired of being a hot sweaty mess while my wife leisurely cruises around on her bike. No need for speed records or long range - i just want to cruise pedal assisted for 8 or so miles at 14 mph.

In an effort to keep things simple I would like to use the existing Ryobi 40v system I have for some power tools. I can always add a better battery later but for now I'm comfortable with the cost and safety of these 36v 4 ah batteries. Seems like the issue with using the Ryobis is the BMS cutting out with any sort of high amp draw. Thats why I would like to stick with one of these ebike kits off Amazon that have a 250w-500w motor and a 36v controller. Another issue for the battery is low voltage cutoff - trying to figure out if I can adjust that with the controller or if I need anything else.

So hive mind, what are your thoughts on an amazon ryobi battery adapter, 36v 350w front hub kit and a Ryobi 36v 4ah battery? Good simple setup for what I want to do or will I be disappointed with the small battery? I should note that I live in Florida so no hills to worry about. 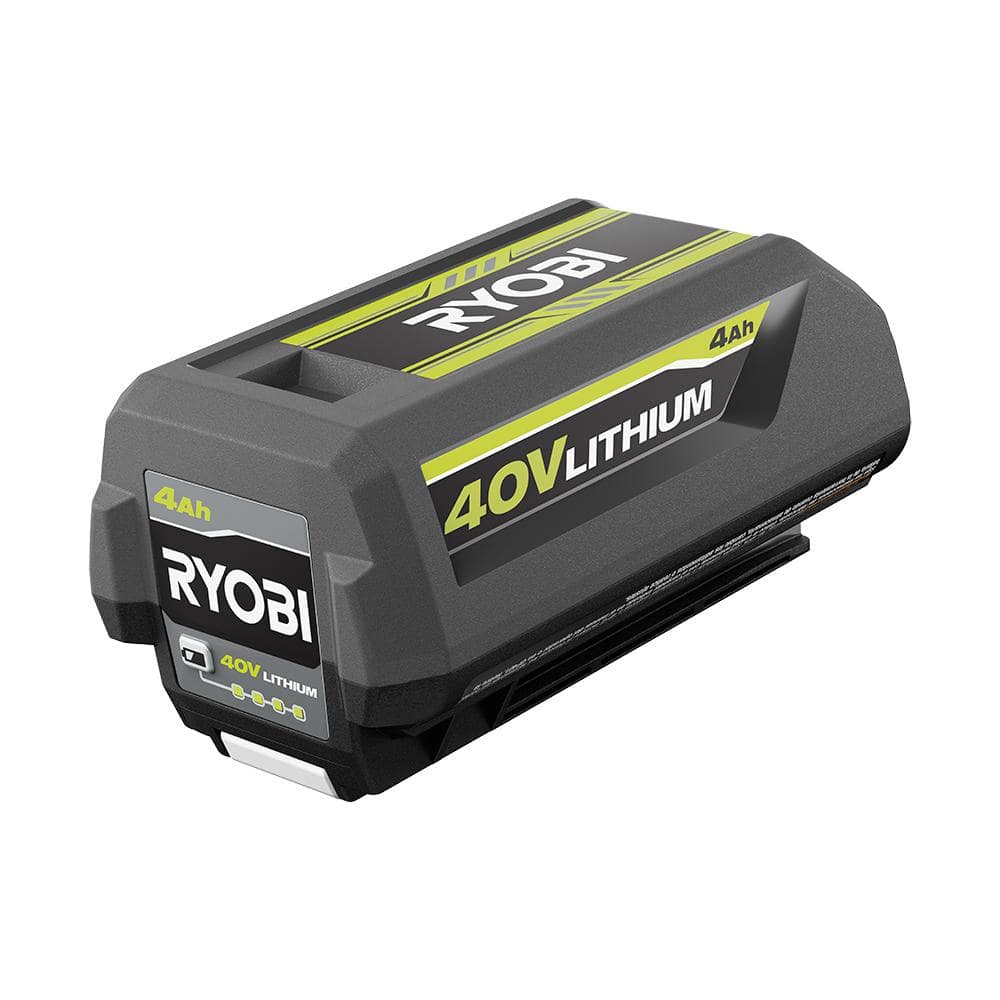 The RYOBI 40V 4.0 Ah Battery is the perfect addition to your RYOBI 40V collection. This 4.0 Ah battery gets 2X more runtime than the RYOBI 40V 2.0 Ah Compact Battery while delivering the same fade-free
www.homedepot.com
D

That should just about work for what you describe. The adapter may, or may not, hold the battery on the bike securely. I would carry a spare battery if extra range is needed.

Florida is an ebikers paradise.
D

Some things to be aware of when using such batteries.

I have dismantled several of these, and watched and read about dozens more.

Most controllers on inexpensive kits are not programmable at all, however a 36V kit will have a roughly appropriate LVC for a 36V battery, which is what you have. Actually 42V max voltage, total discharge around 30V (this is sort of a matter of opinion), Riyobi calls it 40V and not 36V because it sounds better. 36V is called "nominal", but it is really a judgement call and general convention, not a strictly scientifically-chosen number.

In case you are thinking about paralleling two packs for 8AH, this has been done, but if you look at power tools, systems designed by large companies with engineering staffs and product liability lawyers in-house, no consumer-grade tool I have seen uses parallel packs, some will allow two to attach, but these are used sequentially.

They need to be very close in voltage when paralleled, because they will very rapidly become identical when connected this way.

The largest units for lawnmowers and sno-blowers are getting into very reasonable AH ranges for our use.
E

I've read about paralleling , going to stay away from that for now and keep it simple. Any tips to prevent over discharge?
D

You need either a voltmeter in-line with the batteries, and/or a programable controller, or at minimum with an LVC set at a safe level.

Exactly what is a "safe level"? Well, usually the BMS on the battery is set to a higher number than the LVC on the controller, but there is some variation on this. 28V, 30V, 32V, ??? With hi-quality, carefully matched cells, a bit lower than average is likely OK.

Actually, what you should do is to run the cell pack in a tool until the tool shuts down or the last light blinks warning you to do so soon, then put a voltmeter on it and use that voltage as a guide. The lights on the cell itself are just a crude voltmeter.

When you draw high amps from a lion battery, the voltage will sag. With only 4Ah, there is, seemingly, not much cushion. Now we will talk about C-rate.

Draw 4 amps from a 4AH battery, that is a C-rate of 1. Draw 8 amps, that is a c-rate of 2. While some types of lithium can handle extremely high c-rates of 10-20, those cells do not last very long. Toy helicopter packs. Long-lasting packs, such as on ebikes, have very low c-rates, 1.5 being a high number in general. Hi-quality, well-matched cells will do a bit better, but lifetime will decrease and voltage will sag even as you get close to 1.

Add to this that voltage and available amps both decrease steadily as the battery is drained. Basically, towards the end of your ride, you may need to pedal a lot.

I will make a specific recommendation, the MXUS XF07, mine has lasted over 8 years and over 20,000 miles, in a 700c wheel I get about 19mph, with your (likely) 26" wheel, top speed should be about 16mph. 36V 360Watt. Geared hub. Nothing fancy, but ZERO problems. Had a flat on the motor wheel. Twice now. Replaced the donor bike, replaced the battery, tires, break pads, seat. Neighbor has one as well, nowhere near as many miles, but same motor kit, zero problems. Right up your alley.

Two batteries, hot off the charger at the same time, two chargers, voltmeter them to within significantly less than 1V difference, ( 0.1?, 0.01?, 0.5?) parallel them, should be fine. Long term, ideally both batteries should have IDENTICAL usage times, charges, age, etc. to be as identical as possible.

It can be done and has been done several times, but I have NOT seen any reports of users continuing to parallel over a long period, but agreement that it should work, in general. 4AH is just damn small.
E

Thank you so much!
L

I am using a Ryobi 40V 7.5 AH battery on my 250 watt e-bike. I have a battery combiner pack that allows me to run 2 batteries in parallel, however I usually just switch between them. The 7.5 Amp Ryobi I have fused at 15 amps and have not had any blown fuses, nor has the battery pack shut down via the Internal BMS. The 7.5 pack gives me over 15 miles of range on flat and level gravel, full speed (~15 MPH) with me pedaling a minimal amount to trigger the PAS sensor.
I can't speak to the suitability of the Ryobi 4 AH pack, the 7.5 works well.
E

What motor kit are you using?
L

Enyar said:
What motor kit are you using?
Click to expand...

This is added to a heavily modified Hyper E-bike with a 250 watt rear hub drive.

@Enyar, how did your project turn out?

H
Testing and Diagnosing a Kit